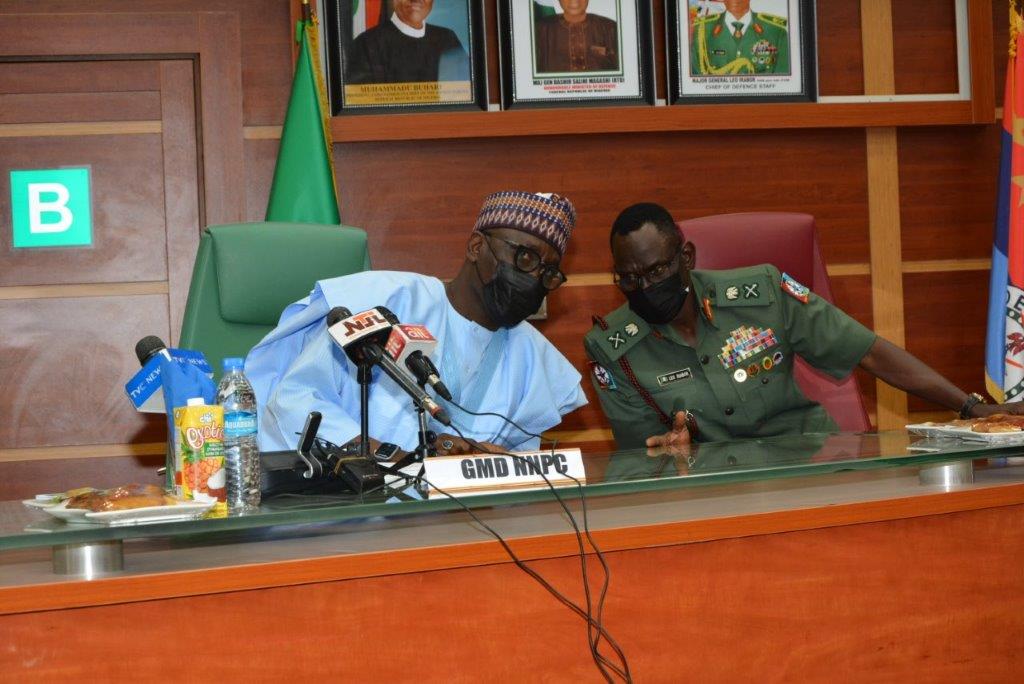 *NNPC GMD, Mallam Mele Kyari (left), conferring with the Chief of Defense Staff, Major General Lucky Irabor, during the visit of the NNPC Management Team to the Defense Headquarters in Abuja … Wednesday.

*Seeks military support for protection of oil and gas assets

Lagos — The state oil company, NNPC has said it still loses 200, 000 barrels of crude oil per day to theft and vandalism despite support from security agencies.

The Corporation’s Group Managing Director, Mallam Mele Kyari disclosed this on Wednesday at a meeting with the Chief of Defence Staff, Major General Lucky Irabor in Abuja.

Keyari who had visited the Defence Headquarters with his top management team to rally more support from the Armed Forces, said crude oil theft is still ongoing across its assets with an average loss of 200,000b/d.

“We have two sets of losses, one coming from our products and the other coming from crude oil. In terms of crude losses, it is still going on. On the average, we are losing 200,000 barrels of crude every day,” Mallam Kyari stated.

He however acknowledge that petroleum products theft on the System 2B Pipeline had reduced considerably.

The Chief of Defence Staff, Major General Lucky Irabor on his part, promised to galvanize the military to provide maximum security for the nation’s oil and gas assets.

General Irabor commended Mallam Kyari for initiating the engagement, saying: “I am delighted that you made this effort, and I tell you that the Armed Forces of Nigeria will collaborate with you to protect NNPC’s assets”.

General Irabor, who acknowledged the significant role of the oil and gas sector to the economy, said there was need for collaboration between the NNPC and the Armed Forces to protect oil and gas facilities which he described as the critical national assets.

“It is my intention to cooperate maximally with you and to give necessary instructions to all officers in the Armed Forces given that our existence, economically, rests almost solely on the NNPC, and to that extent, we must do everything possible to give you everything that you require,” the CDS stated.