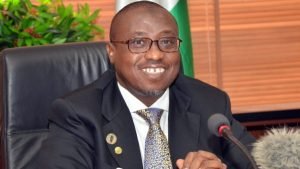 02 July 2018, Sweetcrude, Abuja — The Group Managing Director of the Nigerian National Petroleum Corporation, NNPC, Dr. Maikanti Baru, says the corporation was keen on using some of its new projects, including the 614-kilometre Ajaokuta-Kaduna-Kano, AKK, Gas Pipeline Project, to open up the gas corridor.

He also said the NNPC was desirous of ensuring that power plants could inject stability into the national grid through use of gas.

Baru disclosed this at the 27th World Gas Conference, WGC, which held in Washington, United States.

According to a statement by the corporation, the group managing director said: “NNPC is driving a number of initiatives which included collaborating with the National Assembly to address the fiscals; putting the required infrastructure in place as well as ensuring that new power plants are built.”

He stated that as part of the new gas development initiatives, investors were expected to come in and establish fertiliser and petrochemical plants.

“On our part, we are keen on ensuring the sanctity of all our contracts. This, surely, will ultimately kick-start our industrial development,” he added.

Speaking in the same vein, Chairman, Senate Committee on Gas, Senator Bassey Albert Akpan, said as legislators, the National Assembly is currently working on the fiscals and the administrative aspects of the Petroleum Industry Bill, PIB, having already passed the Petroleum Industry Governance Bill, PIGB, which, he said, was awaiting presidential assent.

On his own part, Chairman, House Committee on Gas, Hon. Fredrick Agbedi stated that the Senate and the House of Representatives were working together to ensure that in the next few weeks, the PIB becomes law so that Nigerians will derive the maximum benefits, in especially, the gas sector.