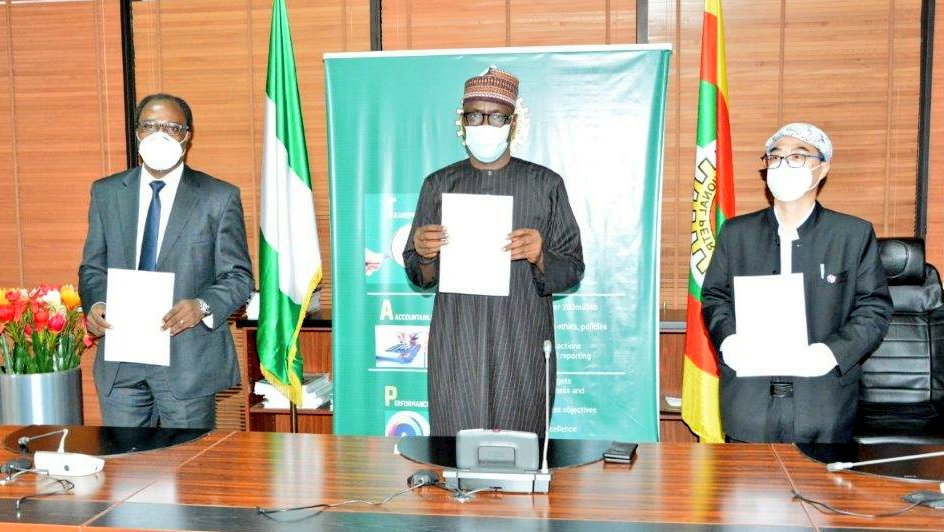 *Mele Kyari (m) with representatives of SAPETRO and CNOOC.

In a tweet on its social media platform, Twitter on Thursday, the state oil firm said it signed a Heads of Terms, HoT, to end the dispute.

“Today,@NNPCgroup signed a Head of Terms (HoT) with its partners CNOOC & SAPETRO, signifying a major milestone towards the resolution of all disputes related to Oil Mining Lease (OML) 130”, NNPC tweeted on Thursday.

A HoT is a document which sets out the terms of a commercial transaction agreed in principle between parties in the course of negotiations. It is non-binding.

Flanked by representatives from CNOOC and SAPETEO, the Corporation’s GMD, Mele Kyari signed the agreement on behalf of the NNPC.

Both CNOOC Ltd and South Atlantic Petroleum had disagreed over production sharing contract on the mining lease.

Meanwhile, earlier on Thursday, the GMD was joined by the Minister of States for Petroleum Resources, Timipre Sylva to officially commission a new LPG plant built in Lagos by Rainoil Limited.