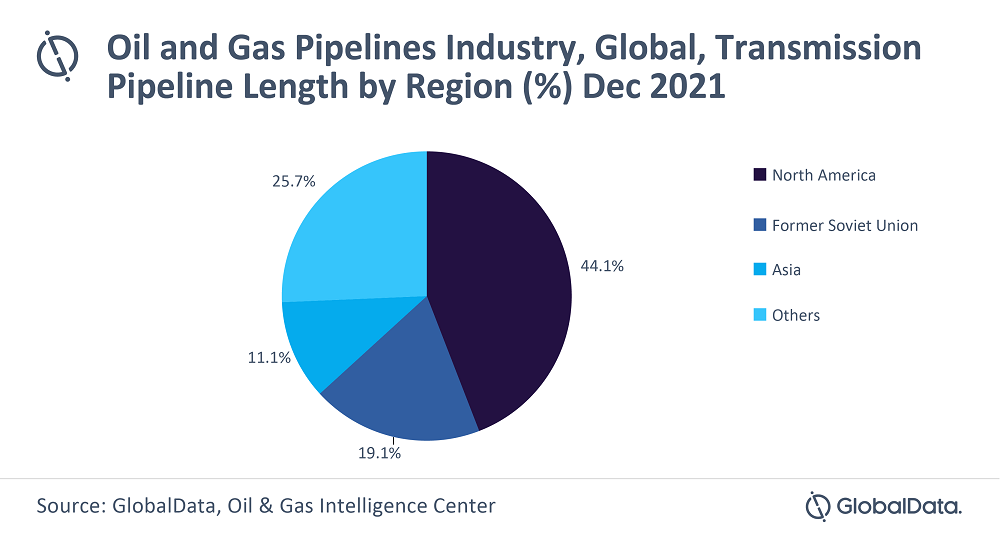 Lagos — With its trunk/transmission pipeline network expected to reach a total length of 967,623 km by 2025, North America will continue to dominate global pipeline length with a maximum share of around 44%, says GlobalData, a leading data, and analytics company.

GlobalData’s report, ‘Global Oil and Gas Pipelines Industry Outlook to 2025 – Capacity and Capital Expenditure Outlook with Details of All Operating and Planned Pipelines’, reveals that the total length of the global trunk/transmission pipeline network is expected to be 2,193,350 km by 2025 (with start years up to 2025, as of December 2021). North America would have the most pipeline length with 967,623 km, followed by the Former Soviet Union (FSU) and Asia with 418,824 km, and 243,772 km, respectively.

Teja Pappoppula, Oil and Gas Analyst at GlobalData, comments: “North America is expected to witness the start of operations of 105 planned and announced pipelines by 2025, adding an approximate total length of 18,879 km.”

Among upcoming pipelines, San Fernando–Cactus is the longest upcoming pipeline with a length of 1,609 km. The natural gas pipeline is expected to start operations in Mexico by 2023. The pipeline would bring much needed gas to energy-deficient states of Chiapas and Oaxaca in Mexico.

“Asia ranks third place with an 11.1% share in the global transmission pipeline length. The total length of the pipeline network is 243,772 km. Sui Northern Gas Transmission natural gas pipeline in Pakistan is the longest pipeline in the continent with a length of 7,915 km,” Teja added.

Growing demand for oil and gas, especially in Asia, and exports are primary drivers for the growth of the transmission pipelines globally.