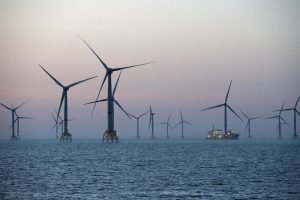 Oslo — Norway will press ahead with North Sea wind power this year, awarding its first development licences as it spurs the transition of its oil and gas industry and despite its already plentiful renewables supply.

The government has earmarked two areas in the North Sea for up to 4.5 gigawatts of floating and bottom-fixed wind turbine capacity, just under half the current installed capacity in Britain, Europe’s offshore wind leader.

Norway does not actually need offshore wind farms for power – nearly all its electricity comes from renewables already – but instead sees the sector as a means of helping its vast oil and gas industry secure a new, low-carbon business model for the future.

Oslo will present details of the tender this spring as part of a white paper on the energy sector, and first wind farms could be in operation by the end of the decade.

Many details remain unclear but the process should follow oil and gas exploration procedures where typically seabed rent is not charged.

Norway, western Europe’s largest oil and gas producer, is examining how it can adapt its petroleum industry.

Norway’s Equinor and several other European oil firms including Total, BP and Shell have announced plans to massively scale up their renewable power portfolios, often focusing on offshore wind, as they seek to reduce reliance on oil to satisfy stakeholders and meet climate targets.

“We believe that especially offshore resources offer all the prerequisites to succeed. We have the knowledge, the experience, we have a good track record from establishing and building advanced installation in tough conditions far out at sea,” NOG oil lobby boss Anniken Hauglie told Reuters.

“We now need to use the time to build up new industries, new value chains, that will over time become the new legs for Norway to stand on,” she said.

Floating turbines are a less mature technology but widely seen as offering the greatest opportunity for Norwegian firms.

Equinor is developing one such pilot project, called Hywind Tampen, which will supply power to its Gullfaks oil platform.

Norway is seeking to cut greenhouse gas emissions produced by its offshore platforms, which tend to be powered by on-site gas turbines. Linking them to the power grid onshore is one option, and offshore wind turbines are another.

“A lot of players want to position themselves in Norway, as it is a huge flagship project,” said Vegard Wiik Vollset, vice-president renewable energy at consultancy Rystad Energy.

“It has clear synergies for some of these companies given its potential for electrification of oil and gas fields on the Norwegian Continental Shelf.”

Like oil, Norway would export the offshore wind it produces. In 2020, hydro and onshore wind power accounted for more than 98% of Norway’s record high electricity production of 154.2 terawatt hours (TWh), generating net exports of 20.5 TWh, data from regulator NVE showed.

“The way the market is looking now, we believe there will be a power surplus for a long time into the future,” said Christian Rynning-Toennesen, CEO of top utility Statkraft.

Statkraft will participate in the offshore wind tender with Aker Offshore Wind, a company created by the Aker group, which previously focused mainly on oil and gas.

Non-EU Norway could also help to meet the European Union’s goal of increasing offshore wind power capacity to 60 GW by 2030 from 12 GW currently.

“If they want to achieve it, it needs to happen in the North Sea and if it happens in the North Sea, Norway should be a part of it,” said Steffen Syvertsen, CEO of utility Agder Energi.

Agder Energi is also bidding in the upcoming offshore wind licensing round, teaming up with Vaargroenn (“our green” in Norwegian), a joint venture of private equity firm HitecVision, once solely focused on oil and gas, and Italian energy producer Eni.

“Based on current developments, this could happen in 5-8 years’ time, most likely in 10-15 years,” Seland said.

“It’s not enough with one wind farm, you need a view of 3-4 wind farms of a certain size,” said Daniel Willoch, a policy adviser at wind power lobby group NORWEA.

Others seemed confident of government support.

“One thing we have seen across the world is that governments find their own way to support industrial development,” said Aker Offshore Wind CEO Astrid Skarheim Onsum.

Norway had access to “a vast toolbox of support mechanisms” and a history of finding tailored solutions to support its industrial development, she added.

“It reminds me a little of the time we discovered oil for the first time,” Tina Bru, oil and energy minister, told a recent energy conference.