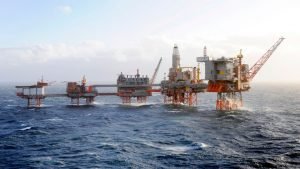 *A giant oilfield in the southern Norwegian North Sea.

08 October 2018, News Wires — Norway plans to step up spending on looking for oil and gas in the northern Barents Sea close to its border with Russia, the country’s 2019 budget showed on Monday.

The government has proposed to allocate an extra 50 million Norwegian crowns ($6.04 million) to conduct a so-called 3D survey over a large geographical structure that straddles the border with Russia.

“Knowledge is crucial both for good resource management and for safeguarding national economic interests,” Norway’s Oil and Energy Minister Kjell-Boerge Freiberg said in a statement.

The country’s oil and energy ministry did not identify the structure, but said it was located in an area which is not yet opened up for petroleum exploration and development.

A Reuters source familiar with the decision said the areas the government wanted to take a close look at were opposite exploration blocks awarded by Russia on the other side of the border.

Norway’s state-owned oil company Equinor, previously called Statoil, had plans to drill with Rosneft in one of the blocks, known as Perseyevsky.

But Western sanctions imposed on Moscow after Russia seized Crimea from Ukraine in 2014, have ended such plans.

Oslo and Moscow did a deal in 2010 to end a dispute over their maritime border, which included oil and gas exploration. But since Russia’s annexation of Crimea Norwegian officials have expressed concern about Russian military exercises in the region.

Norway also fears that tensions between Russia and the West could have implications for Svalbard, which belongs to Norway but has become significant because of growing interest in Arctic oil and gas.

Norwegian Petroleum Directorate said last year the area bordering Russia southeast of the Arctic archipelago of Svalbard, which is not yet opened up for exploration, could hold 8.6 billion barrels of oil equivalents.

The Directorate, which has previously conducted 2D surveys and drilled shallow wells to collect sediment samples, said there were a few large structures straddling the border with Russia, including Sentralbanken High.