on: September 22, 2018In: Community Development, featured 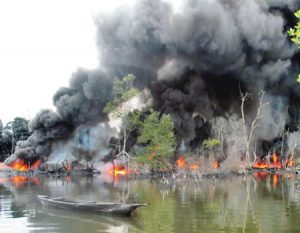 The campaign which is been carried out in conjunction with the Rivers State Ministry of Environment is also demanding an end to oil theft.

Speaking, at the program tagged, “End Kpo-fire Campaign” in Tai Local Government Area of Rivers State, the Director General of NOSDRA, Mr. Peter Idabor, said the move was imperative to ensure the success of the clean up of oil-impacted communities in Ogoiniland.

Idabor called on youths of the area to desist from illegal bunkering so as to avoid a re-pollution after the cleanup exercise.

Represented by the Principal Environmental Scientist in the agency, Mr. Solomon Nkpenewi, Idabor warned about the dangers of kpo-fire.

“The issue of re-pollution if it is not stopped, more and more areas will be affected and which will not be to our advantage.

“So we are appealing to you people that we should desist from anything capable of re-polluting the environment in the Niger Delta, for our own future, for our own good, and for our own sustainability.”

Also, the Rivers State Commissioner for Environment, Prof. Roselyn Koinya, charged the youths of Ogoni to support moves by the government to make the area clean.

Represented by a Director in the Ministry of Environment, Charles George, Koinya said the enlightenment campaign was imperative for Ogoni people to support the government to make sure there is peace in the area before and during the commencement of the cleanup.