on: November 12, 2021In: Community Development, featured 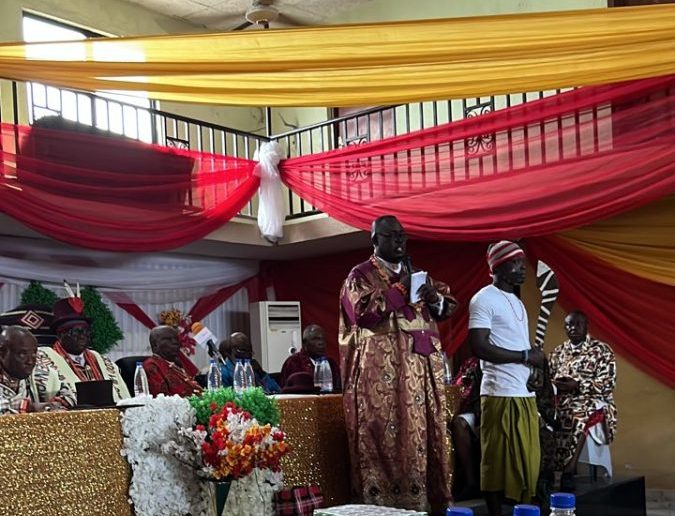 *Aiteo management team in a council meeting with the Opu-Nembe community on Thursday.

Port Harcourt — The National Oil Spills Detection and Respose Agency, on Thursday confirmed that the oil spill reported from an oil well operated by Aiteo Eastern Exploration and Production Company, within OML29 was yet to abate.

Director-General of NOSDRA, Mr Idris Musa, said the intensity of the leak at the incident site, was hampering investigations to determine the cause of spill.

Musa said efforts were still ongoing to ensure the well is shut in within the shortest possible time.

“A Spill was reported by AITEO at her Santa Barbara well 1 well head on November 5, 2021. Joint Investigation Visit to the Site was carried out on November 6, 2021.

“Due to the continuous spraying of crude oil from the well head, the cause of spill was not determined by the joint investigation team which comprised NOSDRA, DPR , State Ministry of Environment and Community representatives.

“AITEO was directed to shut in the well so that proper JIV will be conducted on this facility.

“Recovery of free phase oil was ongoing as at the time of this visit. AITEO was also directed to deploy more booms to contain the spilled crude oil.

“As at today, November 10, 2021 and according to AITEO, efforts are still ongoing to ensure the well is shut in within the shortest possible time,” Musa said.

Meanwhile the management of Aiteo has said that the company was yet to ascertain the volume of the crude discharged into the surrounding environment, while admitting that the magnitude was high.

Spokesman of the company, Mr Mathew Ndianabasi, said the oil firm suspects sabotage and third party interference as the cause.

However, a stakeholder and Environmentalist, Mr Iniruo Wills, says video evidence of the spill from Aiteo facility was similar to the 2010 Gulf of Mexico Deepwater Horizon disaster and the 2012 Chevron KS Endeavour catastrophe in Koluama, Nigeria.

Wills also dismissed the suggestion of sabotage by Aiteo, when investigations into the cause of the leak was yet to commence.

“There was a massive spill that went on for a week at that same Santa Barbara Well 1 in OML29 operated by Aiteo in 2019, but that spill has neither been cleaned up, remediated nor compensated for.

“Now this mega spill disaster is going on from that same well for about a week now in a country with virtually zero installed spill-response capacity.

“Several oil industry experts who viewed the video clip have likened it to the 2010 Gulf of Mexico Deepwater Horizon disaster and the 2012 Chevron K S Endeavour catastrophe in Koluama, Nigeria.

“And they have pointed to the likelihood of it being a gas pressure release from pent-up gas over the years from a capped and abandoned non-producing well.

“Beyond Aiteo whose operations have made its predecessor, Shell, look like saints, this incident once again challenges the Government of Nigeria and industry regulators to wake up to their statutory duties.

“It makes the Nigerian delegation to the ongoing COP 26 Climate Change summit in Glasgow look like they went on an idle and pretentious frolic to Glasgow.”