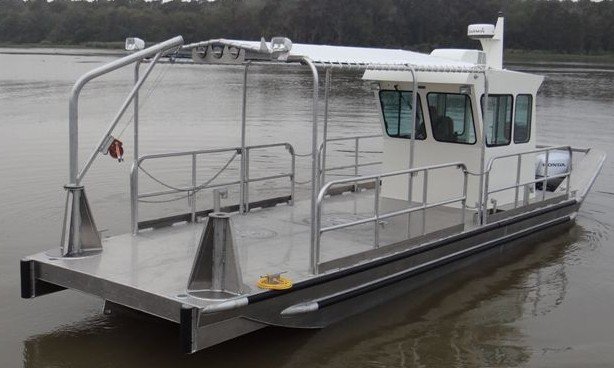 06 April 2018, Sweetcrude, Lagos — The Nigerian Ports Authority, NPA, has called for the deployment of Flat Bottom Vessels, FBV, for the movement of cargo into ports channel with low draughts.

Speaking in Lagos when during a visit of the Nigerian Chambers Shipping, NCS, to the Headquarters of the Nigerian Ports Authority, NPA, its Managing Director, Ms. Hadeza Bala Usman yesterday assured members of the group of the agency’s support in ensuring more FBV were deployed to ports across the country.

When she received members of the Nigerian Chamber of Shipping, led by its President, Mr. Andy Isichei assured that the Authority would be willing to work with the chamber for the mutual benefit of both parties.

In a speech delivered by Mr. Ibrahim Suwaid, the Managing Director of the agency, Ms. Hadeza Bala Usman said that the use of the FBV in some shallow draught channels would serve as a workable solution for the draught limitations in some channels, especially in Calabar and Warri.

She explained that it was a thing of joy that a flat bottom 200 meters long and 61,000MT heavy vessel FBV, berthed last year in Calabar Port despite the draft limitations of the channel.

This, she said goes to show that such vessels can navigate in such shallow channels.

She, however, appealed to stakeholders in the nation’s maritime sector, especially those in the shipping sub-sector, to devise ways of collaborating with the Authority to deploy more of FBV in such channels considering their comparative advantage.

“The Authority would be willing to work with the chamber for the mutual benefit of both parties.

“The Nigerian Ports Authority would be very willing to midwife and facilitate any proposal which would help make the new arrangement possible.

“With the cooperation of Stakeholders such as members of the Nigerian Chamber of Shipping and other relevant stakeholders, the proposal on the FBV is realisable.”

Earlier, the President of the Chamber, Mr. Andy Isichei had told the Managing Director that the shallowness of some sections of the channels is of concern to members of the Chamber and said the FBV should be encouraged in such channels.