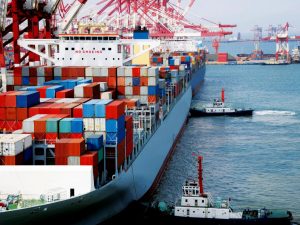 01 May 2018, Sweetcrude, Lagos – The Nigerian Ports Authority, NPA, says its greatly improved, adding that this was demonstrated recently when the NPA Emergency Response team undertook a drill at the corporate headquarters building of the authority on Marina, Lagos.

“The preparedness of the Nigerian Ports Authority to workplace emergency has been greatly enhanced with the acquisition of effective and modern firefighting equipment as well as the periodic training of the officers and men of the Health Safety and Environment Division,” NPA said in a statement.

During the drilling exercise, which forced all the occupants of the headquarters building to evacuate their various offices to the designated muster points, the firemen deployed their newly-acquired firefighting equipment and skills to demonstrate how to contain fire situation on the main building.At the end of the exercise, according to the statement signed Abdullahi A. Goje, General Manager (Corporate and Strategic Communications), the General Manager, Health, Safety and Environment (HSE), Mallam Ahmed Yusuf, described the drill as “very successful”, noting that a total of eight minutes were spent to evacuate the seven-storey building by the occupants as against 10 minutes as was recorded last year during a similar exercise.

He explained that in this year’s exercise, there was no record of malfunctioning of any equipment, adding that the sky-lift fire engine and firefighting equipment were functional.

He also said an evacuation of a casualty in a smoked office was simulated during the exercise and was safely transferred into an ambulance for transmission to the hospital, reflecting a real life situation.

Yusuf acknowledged the existing collaboration and good working relation between the department and the Lagos State Agency for Safety and Emergency.

He charged all port users and stakeholders to ensure that all necessary facilities are put in place towards the protection of lives and property especially from fire destruction.