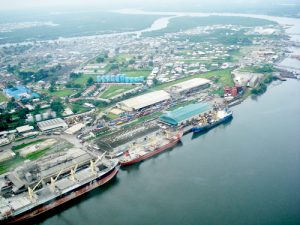 Port Harcourt — The Nigerian Ports Authority, NPA, has announced that seaports in Rivers State were now safe, viable and busy with business activities.

The Port Manager, Port Harcourt Port Complex, Abubakar Umar, speaking during a sensitisation visit by the Energy and Maritime Reporters, EMR,  said he has been working with the mandate to restore the ports in Rivers State to full viability.

Umar, who assumed office in 2016, said complaints before he came on board were that the ports were unsafe and full of danger and that nothing much was happening there.

He also disclosed that insecurity on the eastern waterways, which hitherto was a big source of concern, was no longer a cause for alarm, as the Port Harcourt ports now operate on Step-1 security grade.

According to him, “Upon resumption, my team embarked on a sensitization drive to importers in the region on the need to route their goods through the Port Harcourt seaportst. We created awareness on the viability of the Rivers port and we allayed their fears about insecurity and other matters.

“The stakeholders bought the idea. Now, the Port Harcourt port is busy and viable. Most of our berths are now occupied, containers now come because two shipping lines now come to Port Harcourt and one more is about to join.”

The port manager also disclosed that journalists were among the listed bodies with the right by international regulations to have a presence in ports around the world.

He said access to the ports for information to newsmen would not suffer, and that NPA in Port Harcourt was prepared to partner with EMR in information dissemination, while appealing to journalists to always get a clarification for information before going to the press.

Earlier, the chairman of EMR, Mr. Martins Giadom, said the visit was to afford journalists the opportunity to explore areas of mutual benefits in the pursuit of a better port system in Rivers State to become economically viable, business-friendly and responsive to global best practices.

Also Read: PFSO warns against carrying arms on board vessels during inspection

Giadom said EMR, as strategic stakeholders in the maritime, oil and gas industry, was pursuing strategic media goals that would help bring to limelight the issues in the sector, as well as accurate and objective reportage, building capacity of members, and synergizing with relevant stakeholders to grow the industry.

“This visit affords us the opportunity to explore areas of mutual benefits in the pursuit of a better port system in Rivers State and other facilities of the NPA in the state which would help transform the ports to become economically viable, business-friendly and responsive to global best practices.

“EMR thus remains an organization that is focused on working in synergy with relevant stakeholders in the energy and maritime sectors to better inform the public, better engage operators in the sectors and beter enhance economic activities in both the Energy and Maritime sub-sectors.

He called for support in the training of journalists (EMR) who cover such sensitive and specialised sub-sectors as energy and maritime in the south-south and south east region.

“We expect that this synergy will remain robust, mutually beneficial, and above all, beneficial to the business community and the state. We shall expect that your esteemed office would support EMR in whatever way possible within your strides, especially, in our ongoing sensitization/awareness campaign on the Ease of Doing business, curbing piracy and insecurity on our waterways, and establishment of transit parks to decongest ports’ access roads.”