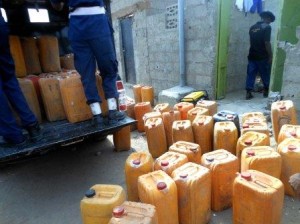 Alhaji Shuayb Jibril, the Commander, NSCDC Bauchi State Command, said in an interview with reporters that the vandals were arrested in the last six months in various local government areas.

He said that Alkaleri, Toro, Bauchi and Kirfi local government areas were some of the places the suspects carried out their activities.

He said that two of the suspects were arrested in Bara village of Kirfi Local Government Area where 28 jerry cans of 25 litres of petroleum products were confiscated from them.

He said the vandals were apprehended while they were scooping fuel from pipes which they allegedly broke, adding that the jerry cans and four unregistered motorcycles were confiscated from them..

He appealed to members of the public, especially community leaders, to always furnish the command with information on the activities of vandals.

Jibril also appealed to the state government to look into the command’s request for the relocation of its headquarters.

“We have to continue appealing for relocation. The place we occupy now is not suitable for our kind of operation.” We are really desperate to move out of this place,” he said.