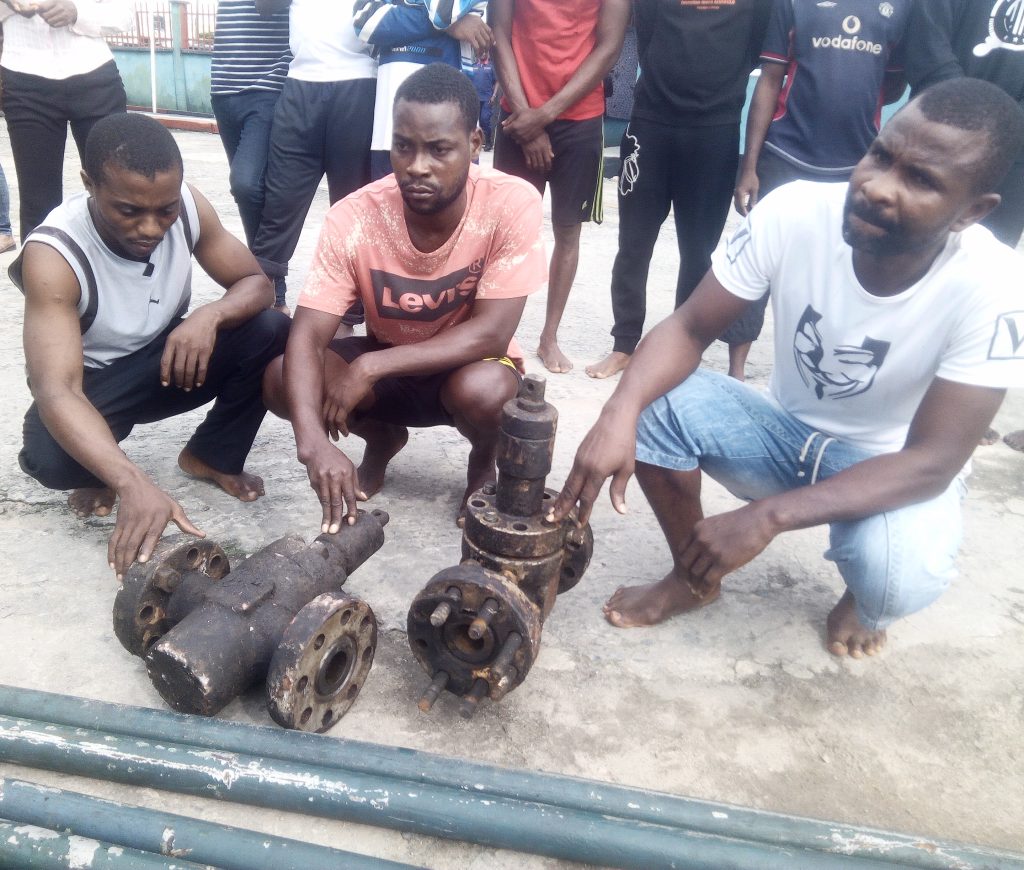 *The suspected vandals with wellhead valves.

24 October 2018, Sweetcrude, Port Harcourt — Not relenting in the drive to rid the country of irregularities in the oil sector, the Nigerian Security and Civil Defence Corps, NSCDC, has arrested a total of 35 suspected oil thieves in Rivers State between September and October 2018.

Apart from the suspects, NSCDC said it has also impounded two cars, 10 trucks, three buses, and two barges within the period under review.

State Commandant of NSCDC, Mohammed Haruna, while parading the suspects to newsmen in Port Harcourt, vowed not to give breeding space to oil thieves in the state.

Haruna explained that among the suspects are three vandals who specialise in vandalizing wellhead and items recovered from the suspects include two oil wellhead valves, oil pipes, a saw and other tools used for vandalism.

“On 29th September 2018, Naval officers handed over 14 suspects with nine trucks with suspected AGO and crude oil. The suspects were arrested along Hurly king waterfront, Yesu waterfront and Sand fill in Eleme.

“On 5th October 2018, four suspects were arrested and handed over to the corps by JTF on the ground of oil bunkering along Alakiri in Okirika Local Government Area, though no exhibit was recovered.

“On 8th October 2018, the Anti-vandal team of NSCDC arrested three suspects with two gateway valve and Volkswagen bus along SPDC line in Agbada Aluu. While on 11th October 2018 one suspect was arrested and handed over to the corps by the Navy with a Toyota Camry car loaded with several sacks filled with AGO along Ubima, all in Ikwerre Local Government Area.

“Also on 14th October 2018, one suspect with two barges loaded with suspected adulterated AGO was arrested by the Anti-vandal team along Bille, while on 15th October 2018, two suspects were arrested with Dangote truck along Egbema in Degema Local Government Area.

The NSCDC boss further disclosed that the command was liaising with the Department of Petroleum Resources, DPR, to ensure that products from NNPC get to the public as at when due, in order to minimize the problem of artificial scarcity through product diversion or hoarding.