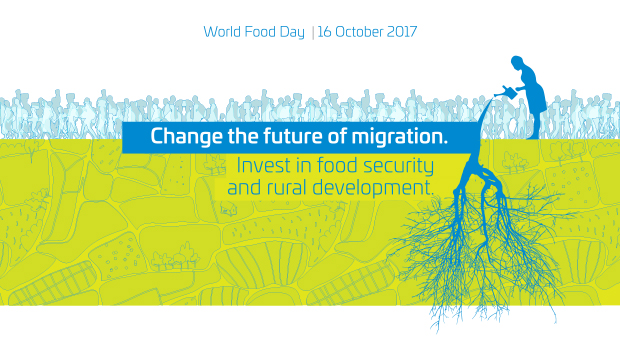 16 October 2017, Sweetcrude, Houston — On October 16 we celebrate World Food Day to commemorate the founding of Food and Agriculture Organization of the United Nations (FAO) in 1945. Events organized across the globe aim to provide greater awareness and action for those experiencing food insecurity. The world produces enough food to feed everyone, yet, about 800 million people suffer from hunger. It has become a global one problem, and today its solution is considered an essential part of achieving Sustainable Development Goal (SDG) 2 – to achieve Zero Hunger by 2030.

According to the United Nations, the world population is predicted to hit the 9 billion mark by the year 2050. During the same period, Africa’s population is expected to double from the current 1.2 billion to 2.5 billion. To meet the food and nutrition needs of this rising population, food production will have to increase by 60%.

One strategy for increasing the food available to feed the ever-increasing population is to ensure proper and better utilization of the food that is already produced. According to FAO, 30% of the global food supply – the equivalent of 1.3 billion tonnes of food each year – is wasted. This is sufficient for providing food for two billion people per year.

The losses directly impact national food and nutritional security. Moreover, African nations have come to realize that food security is linked to national security as well. Food shortages can lead to civil unrest that can subsequently lead to conflict and even terrorism. Governmental upheavals in Egypt and Tunisia during the Arab Spring were partially triggered by food shortages.

In Sub Saharan Africa, annual losses in grains alone are valued at USD 4 billion. This value exceeds the total food aid received in Sub Saharan Africa over a decade and equates to the annual value of cereal imports to Sub Saharan Africa. These losses are attributed to lack of appropriate technologies, poor postharvest handling practices, and general inefficiencies in food supply chains. The figures raise concern against the background that according to the UN Food and Agriculture Organization (FAO) the global productivity should increase by nearly 60% to meet the demands of growing population. With current challenges that Africa faces, the achievement of this goal will be quite difficult without implementation of modern techniques.

In June 2014 at the African Union Summit, African heads of state and government adopted the Malabo Declaration on ‘Accelerated Agricultural Growth and Transformation for Shared Prosperity and Improved Livelihoods’. Among the goals in the declaration is goal 3b which targets to halve the current levels of Post-Harvest Losses, by the year 2025. Realization of these targets requires a multi-faceted approach that involves all stakeholders in the food supply chain. Such an approach is envisaged to include the application of appropriate technologies and practices.

To tackle this issue, African nations’ scientists decided to use nuclear irradiation to keep food and grains safe and healthy. Indeed, the food irradiation could play a significant role in reducing food losses and improve food safety. Nuclear treatment of produced food helps to extend shelf life and improve significantly the quality of offered production.

This method is not only high efficiency but also safe and does not pose any risk to end consumers. The World Health Organization, FAO, and IAEA have reviewed accumulated data from about 50 years of research. They found that irradiated food is as safe as food preserved with other techniques, such as freezing or canning.

Unlike traditional forms of food preservation nuclear techniques do not cause changes to the taste, appearance, nutrition value and final quality of food. After irradiation, the food does not become “radioactive”. Food irradiation is the process of exposing food to ionizing radiation without direct contact to the source of the energy. The food also does not come into contact with the energy source, so it cannot become contaminated by radioactive material.

Chairman of the Nigerian Senate Committee on Science and Technology Prof. Ajayi Boroffice argues that the synergy between agriculture and technology can certainly have a positive effect on the economic efficiency of the industry.

The examples are rather vivid. In Benin, soybean farmers are able to triple their income using the benefits of nuclear irradiation. The implementation of isotopic techniques also makes it easy to regulate the amount of nitrogen in the soil, which is necessary for healthy plant growth.

Close cooperation between farmers and scientists in the West African country have brought about impressive results. Local farmers have seen their crop yields triple or quadruple, which is a fantastic result for the country, which is highly dependent on soybean exports.

Taking use of radiation technologies Tanzania enhanced significantly its crop productivity, for instance, banana seeding have been multiplied through radiation-induced mutation. The technique improved varieties of basic crops such as rice and banana shielded from viruses and insects. The implementation of modern methods in securing crop productivity is quite important for Tanzania, as over 70% of the citizens depend on agriculture which accounts nearly for 25% of the GDP.

Against this background, it is clear to see the vital importance of implementing nuclear technologies in agriculture. Conscious of the benefits that nuclear technologies can bring to the wellbeing of their citizens, more emerging African counties are considering broadening their nuclear capacities. For instance, Zambia is sky-rocketing forward with regard to nuclear science development, the country is planning to build a nuclear university as well as to install a special radioisotope complex with the help of Russian partners to meet its raising demands in key spheres of social and economic activity.

Rusatom Healthcare, a division of Russian State Atomic Energy Corp. Rosatom, will construct a network of irradiation centers in the Philippines starting 2018 to improve the country’s agribusiness sector. The center will provide commercial services of product treatment with ionizing radiation. It will also serve as a research platform for radiation technology and its impact on various product properties. In expanding their cooperation in civil nuclear energy, Bolivia, Morocco and Zambia and Russia agreed to set up integrated irradiation centers to reduce agricultural losses.

“Radiation treatment of food products is one of the various applications of cutting-edge technologies offered by ROSATOM to its foreign partners. With the use of this technology reaching the UN Zero Hunger Challenge looks quite feasible, it’s a goal we all share and the world we want. This is a vivid example of the role of peaceful nuclear energy in addressing global challenges facing humanity today including those related to sustainable development,” said Denis Cherednichenko, Rusatom Healthcare Director-General.

Apart from the food market, radiation treatment is used for the sterilization of medical products and instruments, including medical clothes and gloves, syringes, contraceptives, implanted catheters, dressing, etc. (overall, over 254 types of products). In this segment, the radiation treatment of medical products is called “radiation sterilization”. Thus, in Russia 70% of all sterile products undergo such treatment.