NUEE worries over attacks on electricity workers in Rivers State 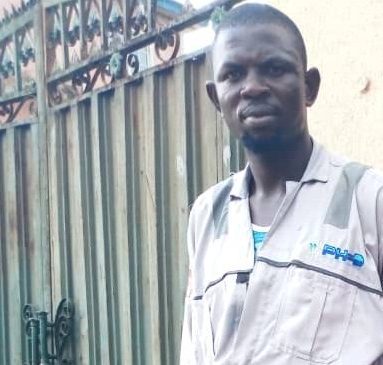 *PHED worker, Jerry Onyejekwe, who was pushed down from an electric pole in Port Harcourt.

21 October 2018, Sweetcrude, Port Harcourt — The National Union of Electricity Employees, NUEE, in Rivers State has expressed concern over the continued attack on its members under the employment of the Port Harcourt Electricity Distribution Company, PHED.

State Organizing Secretary of NUEE, Mr. Innocent LordDouglas, raised the alarm after visiting a PHED staff receiving treatment at a clinic in Port Harcourt, Jerry Onyejekwe, who was attacked by electricity consumers while on fieldwork.

Lori Douglas, who warned that the union would not take it lightly on any persons or communities attacking its members, threatened to cut power supply to areas that brutalize PHED workers on duty.

“I got a call that one of my members working at Agip area of Port Harcourt was pushed down from the pole while trying to disconnect a consumer for non-payment of bills.

“And that was not the first time, the chairman of a community closed to Agip company has also attacked one of my members. In Diobu, Elelenwo and some other areas in Port Harcourt, attacks on our members are on the increase.

“Of course, we know that people are not getting an adequate amount of power supply, but venting anger on members of our union who doing their official duty is very wrong.

“As a union, we are no longer ready to condone such anymore. That area will be disconnected and the culprits must be produced. We have lodged a complaint to the police and it is going to serve as a warning to many others.

Lord Douglas, who is also the Chairman of United Labour Congress, ULC in Rivers State, further appealed to members of the public to stop attacking electricity workers on the field, but report their grievances to the appropriate authority.

“Even the staff themselves are also affected by the power situation in the country. As PHED workers, they do not have a special power supply line, they live in the community with every other Nigerian.

“If you have a disagreement with any staff of PHED on the field, all you need to do is to report to the office. Don’t vent your anger on poor field workers that are doing their legitimate work. We will not take it lightly on anybody.”