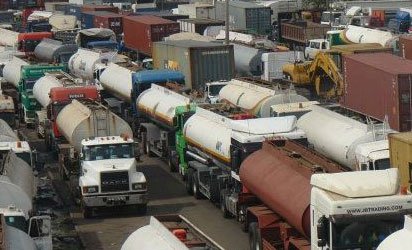 04 December 2017, Sweetcrude, Lagos — IN a bid to checkmate  the excesses of some petroleum tanker drivers especially during festive seasons, the Nigeria Union of Petroleum and Natural Gas Workers (NUPENG) has constituted a task force to check reckless driving on the nation’s highways.

NUPENG President, Igwe Achese disclosed this in Abuja during the commissioning of the national secretariat of the Thompson Ogbodo-led Independent Marketers Branch of the union.

Expressing optimism in the capacity of tanker drivers to abide by necessary safety rules, Achese said those found to have violated traffic rules and consequently endangered the lives of other commuters would be severely reprimanded to serve as a deterrent to others.

“We have been able to advise our members; they have to be careful on the road. They must not drink and drive and when they are driving, they should limit their speed. We have also commissioned a task force to be on the road to monitor tanker drivers in the way they manage their driving attitude on the roads and we want to believe that we are going to have an accident-free yuletide”, he said.

On the long-running battle with International Oil Corporations IOCs who have continued to disallow their workers from joining the labour union, Achese urged the federal government to muster the necessary political will to reverse the trend.

According to him, “It is only in Nigeria that we have challenges of unionisation. It is an international issue. From the ILO level Nigeria also signed a treaty that we are allowed to unionise, but the reverse is the case here. I will tell you that what is lacking is the political will. If the political will is there from the Parliament, the Executive Council and the president himself, I am sure that definitely, our desires to see that all workers in the country, whether in the oil and gas sector or any other sphere, would be unionised and would be given their rights and privileges as expected”.

Speaking on the new secretariat, the NUPENG President noted that, “the labour movement has come to stay and has transformed from just talking about our salaries and wages but also impacting positively on the society. This new secretariat would create jobs for many Nigerians even as we have built a trailer park in Port Harcourt, a hotel in Kaduna and also plan to build our own gas plant”.

He also accused certain unnamed forces of sponsoring those he referred to as fifth columnists in a bid to weaken the union and make it vulnerable to manipulation by state and international non-state actors.

Earlier, the National Chairman of the IMB of NUPENG, Comrade Thompson Ogbodo said with the commissioning of the secretariat, the union now has “a very verifiable address where we can be easily located for smooth business transactions”.