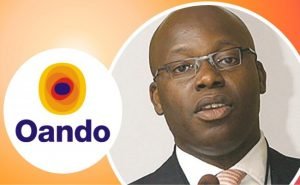 In a statement on Monday signed by the company’s secretary, Ayotola Jagun, Onado said the N4.1 billion profit was from the audited results for the three months period ended March 31, 2018.

Commenting on the results, Mr. Wale Tinubu, Group Chief Executive, Oando Plc, said: “I am pleased to announce that the company has maintained the momentum of 2017 by posting a profit of N4.1 billion in our First Quarter ended March 31, 2018, unaudited financials.

“Our Q1 performance was characterised by a stable operating environment, continued incline in crude oil prices, and the highest level of compliance by member countries of the OPEC accord.

“Considering the background of current industry trends, the company is committed to maximising throughput rates to ensure a positive financial performance in the ensuing quarters of 2018.”

Improved production was primarily due to increased output from Ebendo as a result of the Trans Forcados pipeline, which was down in the same period in 2017 as well as increased production at OMLs 60 to 63 as a result of reduced sabotage and crude theft activities, which necessitated a shut-in on production lines in the comparative period of 2017, the report said.