on: August 01, 2022In: Community Development, featured

Port Harcourt — The Ogoni-Asa-Imo River OML11 Oil Producing Communities have said that host communities must be consulted before any oil operator is given license to operate OML11.

To this end, OML11communities have rejected alleged moves by the Nigerian Petroleum Development Company (a subsidiary of NNPC Ltd.) to give the operatorship license of OML11 to Sahara Energy. 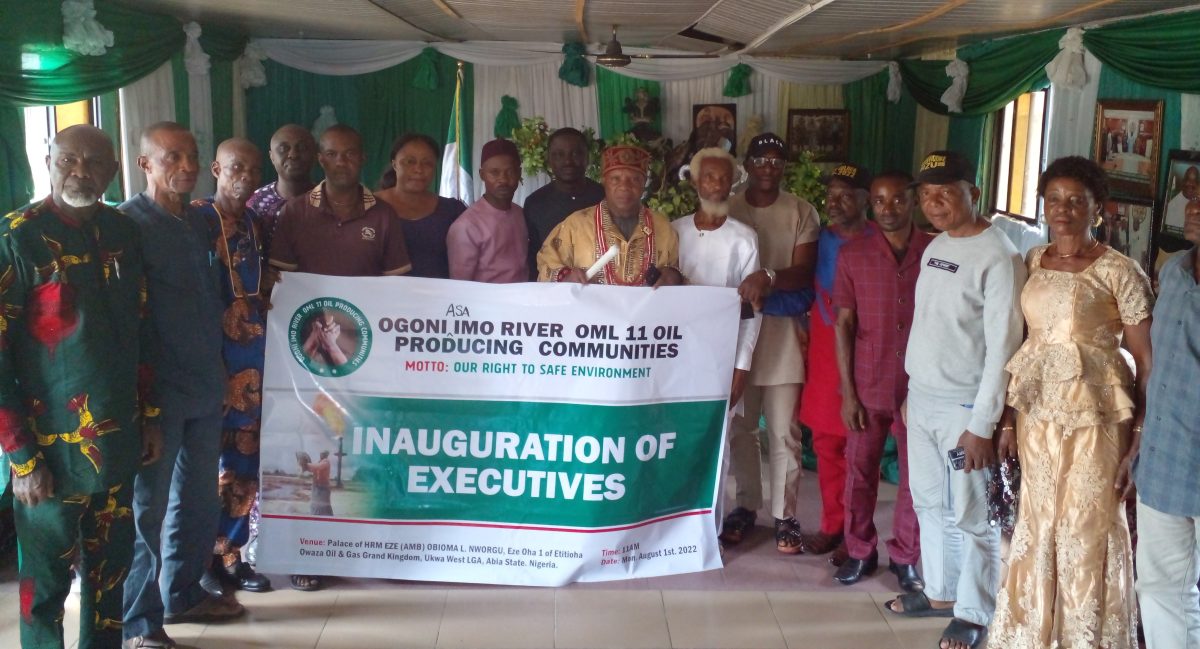 The communities at the inauguration of the Ogoni-Asa-Imo River OML11 Oil Producing Communities Committee in Owaza, Ukwa West Local Government Area of Abia State, urged NPDC to dialogue with the host communities before giving the operatorship license to any oil company.

Topba explained that the Committee was imperative to ensure members of the host communities benefit from the oil in their land, having suffered for many years, regretting that the people remained in penury and abject poverty with nothing to show as host communities.

“There have been agitations in this part of OML11 when Shell’s license was about to be renewed, we all gathered here, and did a meeting demanding that Federal Government should not reissued the license.

“We all agreed that the government should give the license to Nigerian Petroleum Company. And today, the federal government has given NPDC the license. The communities supported NPDC, but NPDC need to have proper discussion with the community.

” NPDC has taken over the facility but have not had talks with the community, but they are having an agreement with Sahara Energy to enter the place. How can NDPC not dialogue with the host communities before bringing in another company.”

The committee also demanded for the UNEP assessment of Asa, Imo River axis of OML11 to ensure a clean-up.

“The communities will not accept Sahara energy, because they had an agreement with NPDC. So NPDC need to come with their plan and discuss with the community then community will now tell them the interest of the community.

“Yes, we appreciate the step the President of the country took by not giving the license to Shell, but he needs to take more steps beyond that to know how it will benefit the host communities.

“And our position is this; the Federal Government must ask UNEP to come here to assess this land, so we can know the level of environmental degradation that have been done so that clean up can take place.

“We have not given the social license to any company and as a group, we are giving ultimatum to NPDC to immediately end any discussion with Sahara energy and come and talk with the host communities. If NPDC continue talks with Sahara they are undermining our collective interest and if they do that we may end up rejecting NPDC.”

Also, the Paramount Ruler of Owaza community in Asa in Ukwa West, Eze Obioma Nworgu, called on the federal government to clean up oil impacted areas in the communities..

Nworgu lamented that despite being a major host of OML11 and having a flow station situated in the community, the people lack basic electricity, good roads and employment.

“Ogoni, Asa OML11 oil-producing communities have suffered a lot. Since 1958 when oil exploration began by SPDC they have not done anything here in Asa land talk less of Owaza, Isimiri, Imo River oil fields. We can not access the road to Owaza.

“The youths have no employment. The youths are suffering, they are blaming the traditional rulers for their woes. We are calling on the newly inaugurated committee to do effective work to ensure government and multinational do the needful.

“During the visit of the Vice President of Nigeria to Abia State, he promised Asa that the second place the government will do cleanup is here and he approved it and up till date, we have not seen or heard anything, you can see, no electricity nor good road.”