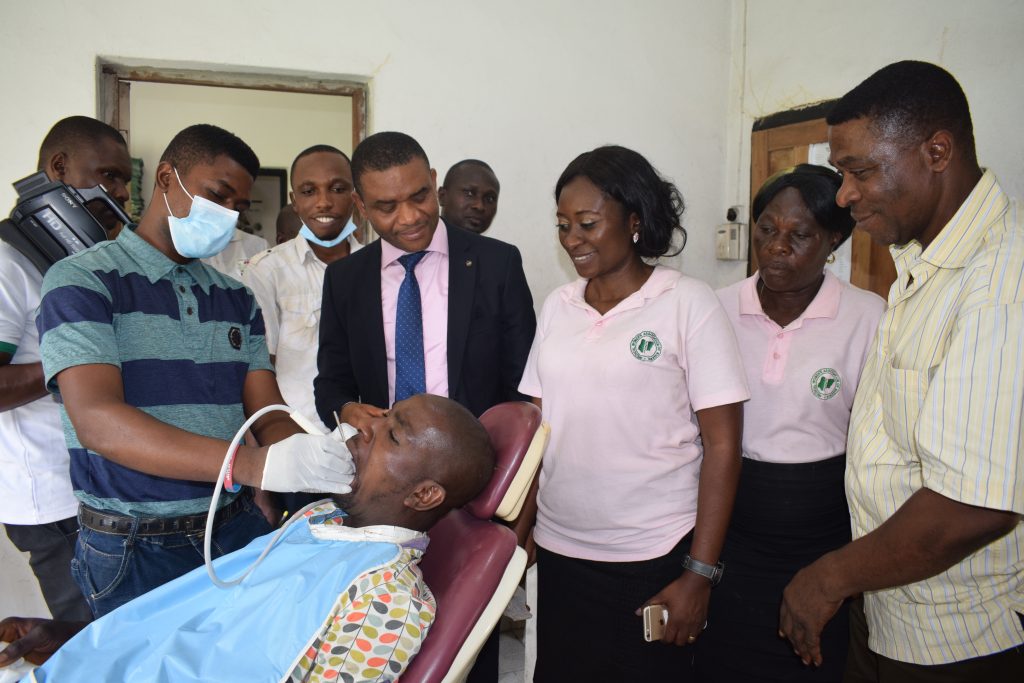 *Dekil with medical experts checking on a dental patient at the ongoing HYPREP medical outreach in Ogoni.

21 April 2018, Sweetcrude, Port Harcourt — The Hydrocarbon Pollution and Remediation Project, HYPREP, has announced that the remediation of oil-impacted sites in Ogoniland would commence by August 2018.

Coordinator of HYPREP, Dr. Marvin Dekil, said advertisement of invitation for pre-qualification of contractors for the remediation of the 26 impacted sites in Ogoniland, was currently ongoing in the national and international dailies.

Speaking at the ongoing second edition of HYPREP Health Outreach Programme in Nonwa, Tai Local Government Area of Rivers State, Dekil assured that the cleanup project will be carried out by best hands with world class standard, as the invitation was open for both local and foreign companies to bid directly.

He explained that the seemingly delay in the take-off of the clean up was because contracting process as enshrined in the Procurement Act, was procedural.

“Presently, an invitation for pre-qualification of contractors for remediation of hydrocarbon impacted sites in Ogoniland in some national and international dailies. The exercise will be a culmination of all the process we have put in place right from the inception of the project coordination office in March 2017.

“As a project, we assure you that the remediation of Ogoniland will be done only be experienced and best hands locally and internationally so as to achieve the desired results of restoring the environment back to an acceptable standard.

“By our work plan, by August we would have concluded the process of getting the contractors to be on site to begin work and I am happy to let you know that the President of MOSOP who is here with me is also a member of the Governing Council. So he is also a party to the policy that we make and he has added his voice that by August, we would have gotten contractors that will be on the sites to clean Ogoniland.”

Asked if it was not contradictory that HYPREP is advertising bid for contractors, whereas it had earlier test-ran the cleanup, Dekil explained that the initial process was a voluntary demonstration by companies while the current one is a contracting process, in consonance with the Procurement Act.

“It is not contradictory, the initial one was a demonstration. We invited companies at their own cost to come and demonstrate if they have a technology that will be good for the remediation.
“So we allowed them to carry out the testing of technology, we didn’t pay anybody to do that and we did not offer any advantage to any company by virtue of their participating, so it was a voluntary work that we allowed companies to show their capacity.

“Now this is a contracting process where we are going to select companies including those that participated in the demonstration and those that did not, and most importantly the best companies.”

The HYRPEP Coordinator also disclosed that the second phase of the free medical outreach which is ongoing in the four Local Government Areas of Ogoniland, namely Eleme, Tai, Gokana, and Khana, was targeting to treat a minimum of 20,000 patients and carry out at least 100 surgeries.