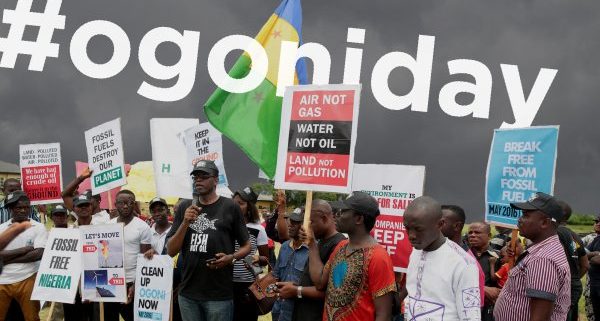 *Activists and supporters gather to mark the Ogoniday celebrations.

25 April 2018, Sweetcrude, Port Harcourt — The United Nations Institute for Training and Research, UNITAR, will anchor the Ogoni livelihood restoration scheme captured in the recommendations of the United Nations Environment Program for Ogoniland, the Hydrocarbon Pollution and Restoration Project, HYPREP, has said.

Speaking at the ongoing medical outreach in Ogale in Eleme, Rivers State, the Project Coordinator of HYPREP, Dr. Marvin Dekil, said the inspection of facilities to be used in giving new sets of skills to Ogoni women and youths to enable them to create wealth for themselves, their families and their communities.

Dekil explained that HYPREP is looking at facilities for agro-related training, assuring that the livelihoods intervention programme which will be a world-class standard and certified by UNITAR, would commence in the next few months.

According to him, “Certainly, the Ogoni livelihood restoration program is coming soon, as at today we have gone to inspect facilities which we are going to use, one of which is the Songhai farm.

“The training is going to be under the framework of the United Nations Institute for Training and Research, UNITAR. It is going to be agro-based and we are also diversifying into other aspects.

“Recently, the Norwegian and American ambassadors were here and we spoke at length about livelihood restoration, so there is active communication even within the international community for such support as well as within the local.

“We are also talking with the World Bank. We want to have a world-class sort of training, a training that will be certified by UNITAR, which means that when one is certified to have been trained in a particular skill, the validity of the training is not confined to Nigeria alone, but all over the world.”

Asked if the ongoing medical outreach in Ogoni was politically motivated as a strategy to return the Buhari-led administration in 2019, Dekil said, “I don’t know what could be political about people’s health. If you are ill, you get treatment. Is that political? It is far from it because people who are sick are being treated.”

Also speaking, a member of the Ogoni cleanup Board of Trustees and Paramount Ruler of Ogale Community in Eleme, King Bebe Okpabi, assured that the Buhari led administration was committed to the cleanup and was taking time to ensure things are done properly.

Okpabi who had hitherto taken the Royal Dutch Shell, the parent company of SPDC, to court in the United Kingdom over the high level of hydrocarbon pollution in Ogale, Eleme, assured critics of the Federal Government that Ogoni clean up that would begin soon.

“The actual clean up will commence in a matter of months, so I believe the government is committed. As a member of the Ogoni board of trustees, I am involved for those who are critical of the cleanup, I will advise them to be hopeful, what we are doing is to ensure that we do a proper planning so that when implementation takes off, it will go smoothly.

“This is not the first government that attempted to implement the UNEP report, the former government attempted and failed, maybe because they did not do a proper planning.

“We have started and I want to assure critics of the federal government that they will begin to see actions now. I want to use this medium to appeal to my people to be a little bit patient that actions have begun, the clean up will begin and we are on.”