on: October 30, 2022In: Community Development, featured

Port Harcourt — The people of Kereken Kwuri Boue community in Khana Local Government Area of Rivers State, have staged a peaceful protest against decades of oil and gas pollution, which according to them has destroyed their means of livelihood, and caused rampant death of both human and livestock in the area. 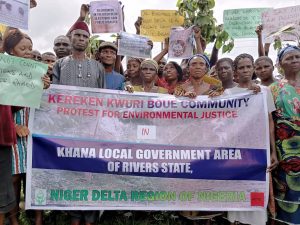 The protesters made up of the paramount ruler the community, members of Council of Chiefs and Elders, men, women and youth groups turn out in their numbers to express their plight over the environmental situation experience in the community since the year 1997 till date.

The aggrieved community marched from Bua-Numaa community down to Kwuri with green leafs, banners and carrying placards bearing different inscriptions such as “our environment is our lives, stop pollution”, “we say no to oil spillage, gas flaring” amongst others.

Leader of the protest and Paramount Ruler of Kereken Kwuri Boue Community, Chief Ezekiel Manson Gara-loo, lamented that his people were dying as a result of the pollution, and urged the federal government and the oil multinationals to stop the pollution and save the community lives. 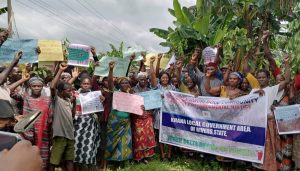 Gara-loo called on the government, well-meaning individuals, international donors and relevant authorities to come to their aid, as the community was at the verge of extinction, while lamenting the loss of community’s means of livelihood which he said was negatively affecting them.

“My community has suffered many years of crude oil spills and air pollution from the activities of the oil companies. It is only the negative effect of the oil business that my community experience. The IOCs are drilling the oil and collecting the billions of dollars, while emitting poisonous gas into my community.”

The monarch also lamented over the neglect of the community by the government, saying, “there is no government presence in our community. This community is not accessible due to the deplorable state of the road, we have school, electricity or potable water.”

Also, the Chairman, Kereken Kwuri Boue Council of Chiefs and Elders, Chief Ledee Tordee, giving an history of pollution in the area, said the community was enjoying its rich natural resources and biodiversity until 1997 when oil and gas pollution surfaced in the environment, causing damages to the ecosystem, aquatic live, animals and human beings.

“The economic trees like orange, mango, pear, walnut, coconut among others which are of much economic value to the community people due to its income generation are no longer productive and have dried up. The root crops like cassava, yams and cocoyam were not left out, as all failing in their yield with drastic reduction in output. The Cassava stems grows up normally but suddenly the leaves get twisted and clung up to the main stems and develop dusty pinkish-white particles which clustered around them.”

He said the community over the years has engaged the services of environmental experts and consultants including late Dr. B. Idoniboye Obu, Prof. G.T.I Ordu, Prof. Olu Anda Wai-Ogosu, and recently Prof. I. K. E Ekwozor of Unic Concept Limited – an environmental engineering and agricultural consultants.

Meanwhile, the Executive Director of Kallop Humanitarian and Environmental Center, Mr. Anthony Aalo, has expressed sadness that Kerenken community had suffered this level of environmental pollution, and nothing has been done by the government or the IOCs to save lives in the community.

Aalo assured that the Kallop Humanitarian and Environmental Center will continue to work with the community to ensure that justice prevailed.