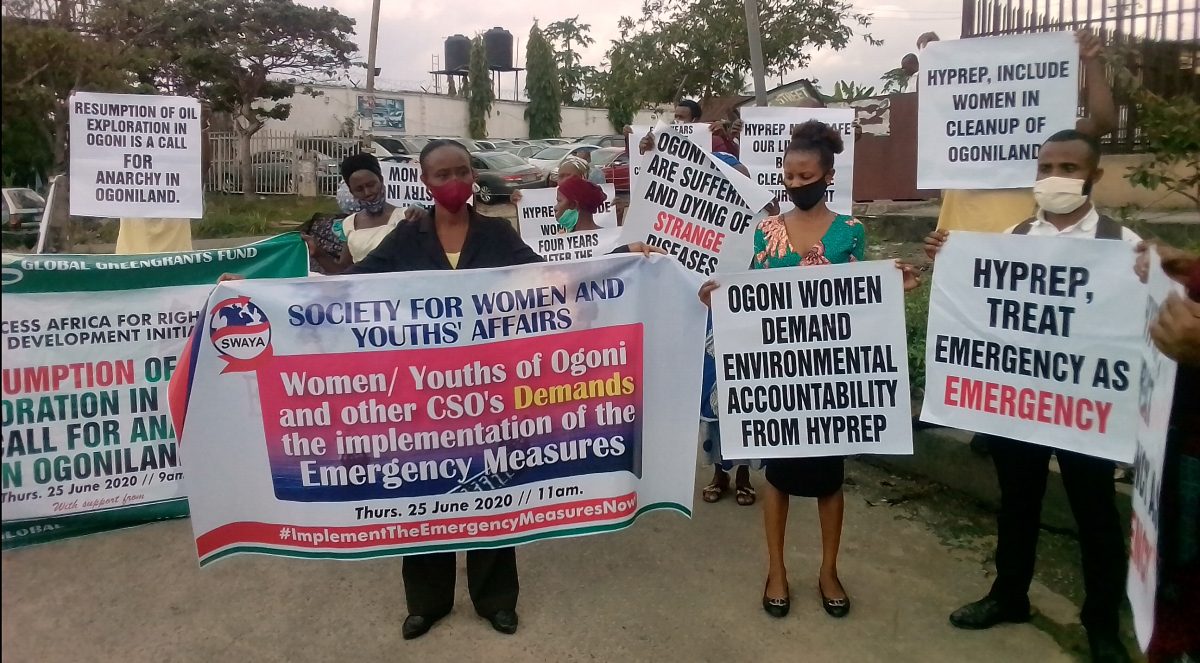 Port Harcourt — The Hydrocarbon Pollution Remediation Project, HYPREP, has been charged to develop a gender policy that would ensure 30percent affirmative action on employments, contracts and interventions are set aside for women.

A coalition of women groups in Ogoniland gave the charge during a peaceful protest to HYPREP office in Port Harcourt, explained that women are the most vulnerable and most impacted by hydrocarbon pollution in Ogoniland.

The women bearing banners and placards with different inscriptions such as, “Ogoni Women are suffering and dying of strange diseases”, “Four years after commencement of Ogoni clean-up exercise, Ogoni women still drink polluted water, “Resumption of oil exploration in Ogoni is a call for anarchy, “HYPREP treat emergency as emergency,”etc.

Speaking, Executive Director of Society for Women and Youths Affairs, Mrs. Amanyie Stella, said women were not actively involved in the cleanup process by HYPREP, explaining that there was no political undertone in their agitation.

Amanyie said HYPREP’s proposed training of only 1200 Ogoni women on garri production, as a means of livelihood was an insult to the sensibilities of Ogoni women, who already were farmers.

She added that failure by HYPREP to implement the emergency measures recommended by UNEP was directly and severely impacting women.

“HYPREP has not conducted a comprehensive disaggregated Needs Assessment for Ogoni communities in general and for women in particular, in tune with international best practices.

“The proposed training of only 1,200 Ogoni women on livelihood activities insults the sensibilities of Ogoni women and grossly underestimates the scale and complexity of the livelihood practices and needs of our women.

“Ogoni women want to further their education in sciences, ICT, education as well as skills acquisition and environmentally sustainable entrepreneurial development of women in other areas of human endeavour.

Also, the Spokesperson, Coalition of Ogoni women Dr. Patience Osaroejiji, explained that Ogoni women were dying of skin cancer and miscarriages as a result of prolonged exposure to pollution.

Osaroejiji said the health situation in Ogoniland explains why UNEP recommended an health impact study of the people of Ogoni, to provide statistics on how pollution has impacted the people’s health.

“In the interim, while HYPREP is in the process of developing its gender policy, the agency must begin to take affirmative action by ensuring that 30percent of employment, contracts interventions are set aside for women and the issues that are important to them.

“UNEP recommended a medical health registry of people in impacted communities to ascertain the health conditions of the people as a result of exposure to hydrocarbon pollution.

“But HYPREP has deliberately refused to do that, because they know that it can be used as an infringement of people’s right to life. HYPREP only carried out medical outreach centered on malaria which already is the commonest disease in tropical Africa.”

For her part, the Executive Director, Lokiaka Community Development Centre, Martha Agbani, warned that Ogoni women would be forced to carryout a legal action if nothing is done to address the marginalisation of women by HYPREP.

Also, Chairman, Rivers Indigenous NGOs and Civil Society Network, Tombari Dumka, said there was a possibility of COVID-19 outbreak in Ogoniland, due to absent of potable water for washing of hands as recommended by WHO.

“UNEP Report in 2011 stated that the water in Nsisioken in Eleme was 900 times polluted by benzene more than WHO recommendations, but up till today there has been no provision of potable water by HYPREP to Ogoni people”