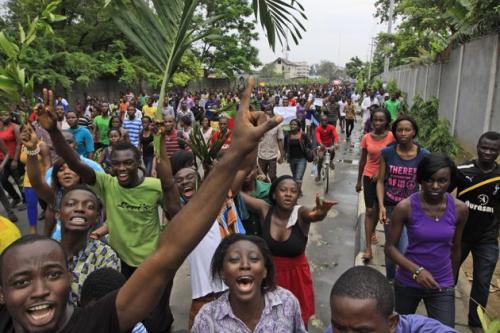 *Thousands of Youth from Rivers state Southeast at Bori, Ogoni land protested against violence in the senatorial district.

01 November 2018, Sweetcrude, Port Harcourt — A youth group known as Ogoni Youth Development Initiatives, says it gives companies operating in the area a one-month ultimatum to review their employment policy for the benefit of youths in Ogoniland or face mass protest.

But the group, Ogoni Youth Development Initiatives, is accusing these companies of operating a skewed employment and empowerment policy which deprives and denies youths of Ogoniland employment into these firms, as well as other benefits.

President of the group, Mr. Saviour Imeabe, explained that the entire Ogoniland suffers environmental hazards from the operations of these companies and as such, no Ogoni community should be neglected in terms of community relations policies.

Imeabe, in a statement, disclosed that the body would mobilize Ogoni youths to protest against the policy of underdevelopment and neglect of Ogoniland by the companies, adding that such attitude led to the kicking out of the Shell Petroleum development Companies, SPDC, from Ogoni in 1993.

He further stated that the gross underdevelopment in Ogoniland was as a result of the culture of continuous neglect and disregard exhibited by companies operating in Ogoniland.

According to the statement, “Most of the companies operating in Ogoniland neglect the Ogoni youth, by shutting the gates of their companies against us.

“Such policy of deliberate neglect is a calculated ploy to create division among the people of Ogoni.

“The Ogoni Youth Development Initiatives will resist the continuous denial of employment of Ogoni youths by these companies.”