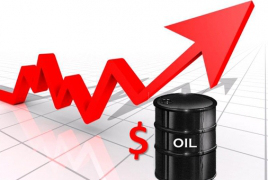 26 July 2017, London — Oil’s rise back above $50 a barrel helped prod stock markets higher on Wednesday and company results and economic data continued to soothe worries that the world economy may be ripe for another slowdown.

European stock markets were mainly higher, led by energy and commodity-linked companies after Brent crude topped the $50 mark for the first time since early June.

A slightly less bullish performance in Asia pulled the MSCI world equity index, which tracks shares in 46 countries, off all-time highs overnight. But early in the European session, it was up 0.1 percent on the day.

“The indications are more positive on the outlook for energy stocks. While there was a lot of kitchen sinking from firms in Q2 numbers, they have reset the expectations over the valuations now, they have cleaned up balance sheets,” said Angelo Meda, head of equities at Banor SIM in Milan.

“The outlook is not so bad (…) We are still missing one component which is the commentary from big oil firms Total, BP, Royal Dutch Shell.”

The pan-European STOXX 600 gained 0.3 percent, in line with euro zone stocks and blue-chips, as oil and gas stocks gained 0.8 percent.

Germany’s Ifo business survey on Tuesday showed confidence soaring to record highs in July amid what its economists described as a ‘euphoric’ mood in German industry while U.S. consumer confidence levels jumped to near 16-year highs.

The latter numbers helped the dollar recover some ground in U.S. and Asian trading on Tuesday, with traders citing a trimming of positions ahead of the Fed meeting, not due until late in the U.S. session. (1800 GMT)

The dollar, hurt since March by a retreat in expectations for further rises in interest rates this year, gained just over 0.1 percent against both the euro and the euro-dominated basket of currencies most used to measure its broader strength.

“Most people have an ultra benign view of what we will get out of the Fed today,” said Koon Chow, a strategist at Swiss private bank UBP.

“The focus is not so much on the next hike but the start of the roll off [reduction of the central bank’s balance sheet]. The Fed has already helped us a lot by indicating that when it happens it will be a very gradual process.”