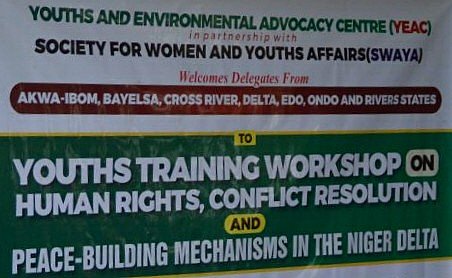 Port Harcourt — A Non-governmental Organisations in the Niger Delta, the Youths and Environmental Advocacy Centre, YEAC and the Society for Women and Youth Affairs, SWAYA, have identified human rights, conflicts resolution and peace building, as key factors to promote development in the oil rich region.

Executive Director of Advocacy Centre and Human Rights Defender, Mr Fyneface Dumnamene Fyneface, said Advocacy Centre was building the capacity of one million youths to mobilized them on conflict resolution in the Niger Delta region, especially on crises between oil firms and host communities, amongst other kinds of conflicts.

Fyneface who is also an Environmental Justice Activists, speaking in Bori, Khana LGA of Rivers State, at a training for youths on human rights, conflict resolution and peace building mechanisms, said the workshop was imperative to build the capacity of youths in order for peace to return to Niger Delta communities.

“Over the years, people in the Niger Delta which is home to hydrocarbon activities, have been deprived the right to healthy environment, source of livelihoods and thus, there has been crisis between oil operators and host communities as a result of under development, environmental degradation, oil spills, gas flaring and other forms of pollution.

“This crisis over the years gave birth to serious issues such as kidnapping, piracy, arms struggle etc, and we all know that there cannot be any meaningful development where there is no peace.

“So at Advocacy Centre, we are building the capacity of Niger Delta youths to go back into their communities and build peace where there is any kind of conflicts, especially between the oil companies and the host communities, so that oil will not only flow, but the people will benefit from the flow of oil.”

Fyneface also disclosed that since 2018 till date, Advocacy Centre has been training youths in the Niger Delta as community peace ambassadors, human rights defenders and those who will appreciate the need to live without conflicts in the region.

“We have set up structures in the nine states of the Niger Delta, where youths are to ensure there is peace in their communities and also monitoring human rights violations, and reporting same to appropriate authorities with a view of getting justice for the victims.

“We have mobilized one million youths to embark on this campaign and advocacy in their communities.”

Earlier, the Keynote Speaker and an Associate Professor at the University of Port Harcourt, Fidelis Alan, noted that it was imperative for youths to build their capacity, in order to address conflicts.

Alan stated that if other organisations could emulate YEAC in the building of capacity of young people, there would have been less conflict in the society, especially in the oil rich Niger Delta region.

“The truth is, we need capacity to be able to address conflicts, especially here in the Niger Delta that we have been so afflicted with so many kinds of conflicts, including oil related conflicts, political conflicts and interpersonal conflicts.

“So the Advocacy Centre has been able to bring a lot of youths for this capacity building, not just to train them but to create the necessary awareness for relevant nonviolent strategies to conflict management.”

Speaking on behalf of the participating youths from the nine Niger Delta States, Ms. Dorcas Isavbor, from Delta State said the training was an eye opener to her, as she would work for sustainable peace in her community.

Dorcas assured that she would organise seminars and talkshows to enlightened the people of her community in Delta State, especially the youths, on the need for peace and nonviolent conflict resolutions.

“As a Peace Ambassador in my area, so I will go back to Delta to create awareness and ensure there is peace in my community. I have networked with the resource persons and I know in subsequent time I can always invite them for peace talks in my community.”