Oil dives to a 21-year low on demand, storage concerns 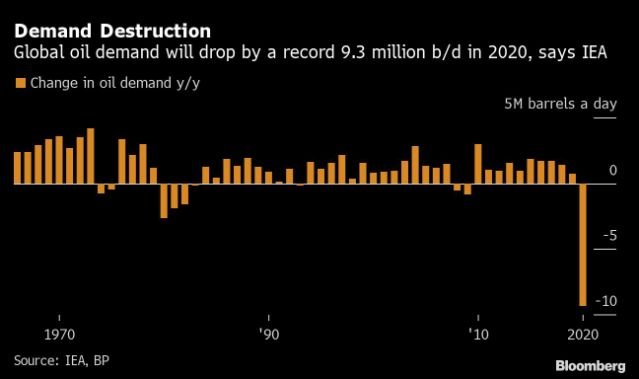 LONDON — Oil plunged below $15 a barrel in New York, a fresh 21-year low, as inventories soar because of the supply-demand mismatch that’s been created by the coronavirus.

The most immediate West Texas Intermediate contract fell as much as 22% to $14.19 a barrel. While a major part of the slump is because the May futures contract expires on Tuesday, the collapse nonetheless reflects a fast-growing glut of oil, and rapidly expanding stockpiles in Cushing, Oklahoma, the American pricing hub.

As WTI futures have tumbled, it has opened up a discount of almost $9 a barrel to the June contract, to which most trading has now transferred. Buyers in Texas are offering as little as $2 a barrel for some oil streams, raising the possibility that American producers may soon have to pay customers to take crude off their hands, particularly as landlocked producers struggle to find homes for their oil.

Crude stockpiles at Cushing, Oklahoma — the key U.S. storage hub — have jumped 48% to almost 55 million barrels since the end of February, Energy Information Administration data show. The hub had working storage capacity of 76 million as of Sept. 30, according to the EIA.

The 9.7 million barrels a day of production cuts agreed by OPEC+ are paling in comparison against this backdrop. China reported its first economic contraction in decades on Friday, an indication of what’s to come in other major economies that have yet to emerge from coronavirus-driven lockdowns. There were some signs of optimism, however, as death rates eased in New York and some of the hardest-hit European countries.

“There is no limit to the downside to prices when inventories and pipelines are full,” hedge fund manager Pierre Andurand tweeted. “Negative prices are possible. I am not saying it will happen. If it does it would be very short lived.”

Despite the weakness in headline prices, retail investors are plowing money back into the oil space. The U.S. Oil Fund ETF saw record inflows of $552 million on Friday, taking total inflows last week to $1.6 billion. The fund said last week it would move some of its WTI holdings into the July contract, citing regulatory and market conditions.

The price collapse is reverberating across the oil industry. Crude explorers shut down 13% of the U.S. drilling fleet last week as the swelling worldwide glut of crude spurred drastic cost-cutting and project cancellations among drillers.