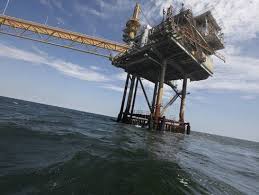 *Oil rig in the US Gulf of Mexico.

13 July 2016, Singapore — Crude futures fell on Wednesday as investors locked in gains after oil prices surged nearly 5 percent in the previous session, partly on forecasts from the U.S. government and OPEC that demand would increase next year.

Oil prices were also under pressure from industry data that showed a surprise build in U.S. crude stocks, price gains in other commodities including gold and a stronger U.S. dollar which gained against a basket of currencies .DXY, analysts said.

“We are on the cusp of U.S. weekly production statistics – the market is keeping a close eye on that. There is maybe a little bit of profit taking ahead of the stats,” said Ben Le Brun, market analyst at Sydney’s OptionsXpress.

Those were the biggest daily gains since April 8.

“We do see a bit of counter-cyclical trade going on in the Asia time zone. Gold is a little higher, equity markets are strong, but not as strong previously, the dollar is up,” said Ric Spooner, chief market analyst at Sydney’s CMC Markets.

“The market is concerned about the momentum in oil prices and whether that will be maintained or not,” Spooner added.

The American Petroleum Institute on Tuesday said U.S. crude inventories rose by 2.2 million barrels in the week to July 8 to 523.1 million barrels, compared with analysts’ expectations for a decrease of 3 million barrels.

While the EIA on Tuesday cut its U.S. and world oil demand growth forecast for this year, it increased its demand growth estimates for 2017.

The Organization of the Petroleum Exporting Countries also said demand for the producer group’s oil in 2017 would be higher than its current production.

Oil markets are also eyeing the impact of an international court ruling on Tuesday that China has no historic title over the waters of the South China Sea potentially putting it in conflict with other countries in the region which have rival claims.