on: August 03, 2017In: Community Development, featured 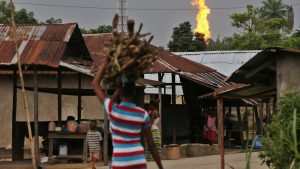 *A host community with gas flaring in the background.

04 August 2017, Sweetcrude, Abuja – Oil and Gas Producing Host communities in Nigeria (HOSTCOM) have said they would ensure the provision of enabling the environment for the resumed operation of international and national oil companies in the Niger-Delta region.

The National Chairman of HOSTCOM, Dr Mike Emuh, said this in an interview with NAN in Abuja on Thursday.

The Acting President, Prof. Yemi Osinbajo, had directed the International Oil Companies (IOCs) operating in the Niger Delta region to relocate their headquarters to their states of operations, based on the provision of the Local Content Act.

Emuh said that the marching order by the acting president could only be possible given the provision of enabling the environment to the companies by the host communities.

“This order will not work until the host communities and the Niger Delta create enabling the environment for the IOCs to relocate back. Nobody wants to settle down where there is no peace, but I can assure you that presently in the Niger Delta there is peace.

“For the past one year, there is no gun shot, no vandalism, no pipe line destruction, this has been made possible by the host communities.

According to him, HOSTCOM is working toward recruiting 10 to 20 boys from each community from the over 1,000 communities in the region for pipeline surveillance.

This, he said, was necessitated by the consideration of the Ministry of Petroleum Resources to give pipeline surveillance to the host community to employ its youths.

He said that the problem of insecurity in the region was heightened by politicians who provided guns for the unemployed youths in the region for electioneering purpose.

“Most of these boys were graduates without jobs and they were hired as thugs; they were empowered by the politicians and after the elections, the boys resorted to using the guns for kidnap of expatriates, and then robbery and eventually the IOCs and the NOCs all left the Niger-Delta because of kidnapping of their expatriates.”

On the cleaning up of Ogoni land, he said that plans were on to commence the full implementation of the exercise, adding that some monies had been released by the IOCs and some international bodies.

“All the stakeholders are putting our heads together, to make sure that things work out; the ground breaking ceremony took place, and many companies have been screened. I want to believe, now that the IOCs and the international body have released some money to the board, I think we are going to commence execution.

“I think it is in the heart of the President and this present regime to make sure that the Ogoni and other parts of the Niger-Delta are cleaned, so any moment from now we will commence operation in the Ogoni cleanup.”

He said the exercise would bring many benefits to the people in the region.

According to him, the former Minister of Environment, Mrs Amina Mohammed, has promised the people of Ogoni, during the ground breaking ceremony, that 1,200 women will be empowered.

“Basically the youth of the Ogoni land will be employed by all the companies and the government. As I am talking to you, two members of the board of the Hydrocarbon Pollution Remediation Project (HYPREP) are from Ogoni.

“Over two members of Ogoni citizens are members of the governing council and our project coordinator is from Ogoni, so people of Rivers and the Niger-Delta will all benefit from Ogoni clean up.“