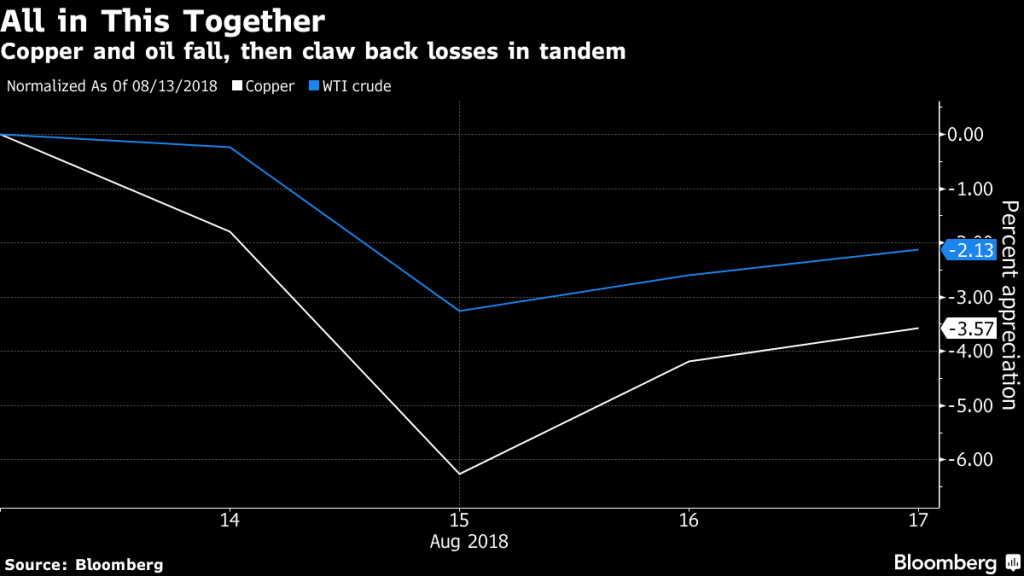 Futures added 0.7 percent in New York amid a slipping dollar, strengthening copper and another labor strike at the North Sea oil and gas platforms. But, prices remained lower on the week. West Texas Intermediate, the U.S. crude benchmark, dropped 2.5 percent this week, the most since July 13 as turmoil in Turkey and the continued Chinese-American tariff battle rattled investor concerns about demand.

Oil has retreated more than 11 percent from the three-year high reached in June as concerns about the global economy grow just as OPEC and its allies revive production. Oil supplies have also appeared more plentiful as U.S. crude inventories expanded by the most since 2017, OPEC raised output in July and Libya recovered some halted production.

“The general indicators have been very bearish here as of late,” said Bob Yawger, director of futures division at Mizuho Securities USA LLC. “The EIA report was one of the most bearish reports in recent memory.”

Oil clawed back with copper on Friday amid a weakening dollar, which helped oil, analysts said.

“The perception is that maybe the situation is not as bad as it was on Wednesday,” Yawger said. Cooper is considered “good indicator of Chinese demand for all commodities,” he said.

West Texas Intermediate crude for September delivery settled at $65.91 a barrel on the New York Mercantile Exchange, up 45 cents. Total volume traded was about 49 percent below the 100-day average.

Brent for October settled at $71.83 a barrel on the London-based ICE Futures Europe exchange, up 40 cents. The global benchmark crude traded at a $6.62 premium to WTI for the same month.

Fueling Fears
A Turkish appeals court refused to release an American pastor as the diplomatic row with the U.S. escalated, tipping Turkey’s economy deeper into crisis and raising fears that the tumult will spread to other economies. Asian equities to emerging market currencies and commodities also slid lower this week after the Turkish lira plunged.

“There’s talk that if the emerging market crisis broadens it will weigh on global demand,” said Bill O’Grady, executive vice president of Confluence Investment Management LLC. “There’s nothing out there friendly right now.”

U.S. President Donald Trump’s trade spat with China and looming Iran sanctions continued to leave investors skittish, analysts said. While the standoff with China could ease after there was an indication of willingness to resume negotiations, an earlier breakdown in talks left investors skeptical about the outcome. Meanwhile, the trade war makes the dollar bullish, further straining oil.

“The problem with the trade war is that it’s not clear what the goal of the administration is,” O’Grady said. “It’s going to pressure oil.”