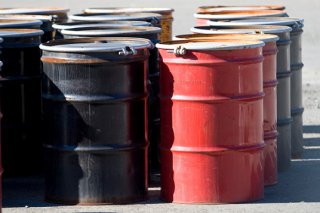 New York — Oil prices fell about 2% on Wednesday, weighed down by equity markets as China signalled readiness to escalate the trade war with the United States, stoking concerns that an ongoing stand-off could hurt demand.

Supply constraints linked to the Organization of the Petroleum Exporting Countries’ output cuts and political tensions in the Middle East offered some support, however.

Both contracts were set for their first monthly decline in five.

In a sign of escalating tensions between the world’s two biggest economies, China signalled it was ready to use its dominant position in rare earths to strike back in a trade war with the United States, Chinese newspapers warned on Wednesday.

Rare earths are a group of 17 chemical elements used in everything from high-tech consumer electronics to military equipment.

Trade worries and slowdown fears have pressured investors to dump so-called “risk assets” such as equities and oil globally and seek safety in German and U.S. government debt.

While China has so far not explicitly said it would restrict rare earths sales to the United States, Chinese media has strongly implied this will happen.

In the United States, cash crude markets in Cushing, Oklahoma and fuel markets in the area have been roiled this week by pipeline outages and disruptions due to flooding in the Midwest after heavy rains.

The front-month spread between July and August U.S. crude futures weakened to trade at the widest level in more than two months. Trading in the spread is closely tied to supply and demand at Cushing, the delivery point for U.S. crude futures.

“The U.S. markets remain very weak in the Midwest as we all are trying to make sense of the Midwest floods which have shut multiple pipelines around Cushing and is generating fears of extended issues … it appears that there are more issues moving barrels out of Cushing rather than in to Cushing,” said Scott Shelton, a broker at ICAP in Durham, North Carolina.

U.S. crude oil inventories were forecast to have drawn down last week, after climbing to the highest levels since July 2017 a week earlier due to near record high production and lower refinery runs in the Midwest.

Weekly U.S. oil inventory data has been delayed by Monday’s Memorial Day holiday, with industry data due later on Tuesday and the government’s report on Thursday at 11 a.m. EDT.

Iranian May crude exports fell to less than half of April levels to around 400,000 barrels per day (bpd), tanker data showed and two industry sources said, after the United States tightened the screws on Tehran’s main source of income.

July Brent crude futures were trading at around $1.50 a barrel above the August contract, a structure known as backwardation, which points to a tight market.

“The last time it was any higher in this segment was in September 2013,” Commerzbank said. “That market participants are prepared to pay such a premium for oil that can be delivered at short notice points to tight oil supply.”

Adding to the support are hopes that supply cuts led by OPEC and its allies, known as OPEC+, implemented at the start of the year to prop up the market, would be extended in a meeting next month.

“OPEC and its allies are due to meet in June or July to discuss the output policy, with the likelihood resulting in an extension to the current cutting policy which has been in place throughout 2019,” said Mihir Kapadia, chief executive of Sun Global Investments. “We expect markets to remain underwhelming until the meeting has taken place as investors look to avoid taking risks until the picture is much clearer.”