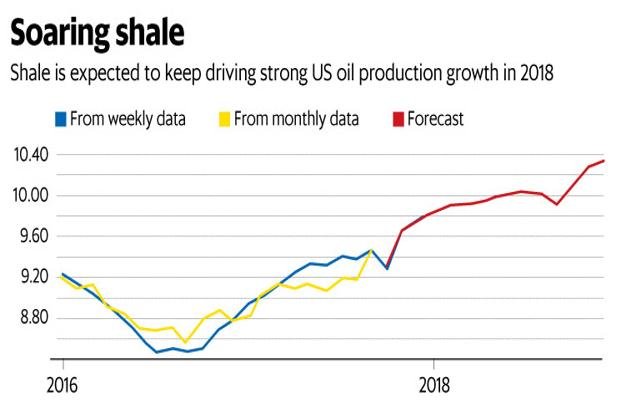 08 June 2018, Singapore/London — Oil prices fell on Friday, as weakening demand in China and surging U.S. output weighed on markets despite supply woes in Venezuela and Iran as well as OPEC’s production cuts.

China’s May crude oil imports eased away from a record high hit the month before, customs data showed on Friday, with state-run refineries entering planned maintenance.

May shipments were 39.05 million tonnes, or 9.2 million barrels per day (bpd). That compared with 9.6 million bpd in April.

Further weighing on prices has been surging U.S. output C-OUT-T-EIA, which hit another record last week at 10.8 million bpd.

That’s a 28 percent gain in two years. It puts the United States close to becoming the world’s biggest crude producer, edging nearer to the 11 million bpd churned out by Russia.

The surge in U.S. production has pulled down WTI into a discount versus Brent CL-LCO1=R of more than $11 per barrel, its steepest since 2015.

“This is occurring because of the rapid increase in production from U.S. shale coupled with the tightening of supplies elsewhere through the actions of OPEC and Russia,” said William O’Loughlin, investment analyst at Australia’s Rivkin Securities.

Market Still Tight
Despite Friday’s falls, Brent remains more than 15 percent above its level at the start of the year.

U.S. investment bank Jefferies said the “crude market is tight and spare capacity could dwindle to 2 percent of demand in 2H18, its lowest level since at least 1984”.

Markets have been tightened by supply trouble in Venezuela, where state-owned oil firm PDVSA is struggling to clear a backlog of around 24 million barrels of crude waiting to be shipped to customers.

More generally, Brent has been pushed up by voluntary production cuts led by the Organization of the Petroleum Exporting Countries and Russia, which were put in place in 2017.

OPEC and Russia meet on June 22/23 to discuss production policy.

On Friday, OPEC’s third-largest producer Iran criticized a U.S. request that Saudi Arabia pumps more oil to cover a drop in Iranian exports and predicted OPEC would not heed the appeal.

“It’s crazy and astonishing to see instruction coming from Washington to Saudi to act and replace a shortfall of Iran’s export due to their Illegal sanction on Iran and Venezuela,” Iran’s OPEC governor, Hossein Kazempour Ardebili, told Reuters.