18 March 2015, Abuja – The Minister of State for Finance, Mr Bashir Yuguda, said on Wednesday that N522 billion was shared among the federal, states and local governments as revenue for February, 2015. 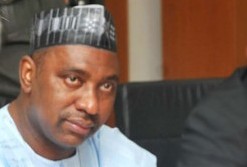 Yuguda announced this in Abuja when he addressed newsmen on the outcome of the Federation Accounts Allocation Committee (FAAC) meeting.

“Also, there is the exchange gain of N55.9 billion which is proposed for distribution.

“Therefore the total revenue distributable for the month of February, including VAT of N58.2 billion, is N522 billion.”

Yuguda said that an additional exchange rate of N45.7 billion for February was received and distributed.

The local governments, he said, received N72.9 billion, amounting to 20.60 per cent of the amount distributed.

He announced that N39.5 billion, representing 13 per cent derivation revenue was shared among the oil producing states.

On VAT, he said that the gross revenue collected for the month decreased by N5.7 billion from the N63.9 billion recorded in January.

Yuguda said N306.9 billion was generated as mineral revenue in February as against the N305.3 billion generated in the preceding month.

According to him, this shows an increase of N1.5 billion between the two months.

He said also, that the non-mineral revenue for February was N94.5 billion, which when compared to the N110.6 billion generated in January, showed a decrease of N16.1 billion.

Yuguda lamented over the low revenue generation for the month, while explaining certain reasons for it.

“There was loss of about 24.48 million dollars in revenue due to further drop in crude oil prices from 52.3 dollars in December 2014 to 48.6 dollars in January.

“The persistent shutdown and shut-in of trucks and pipe lines at various terminals continued to impact negatively in the revenue performance.

“None oil revenues dipped further in February 2015 relative to the previous month,” he said.

He also added that the N35.5 billion which had become a monthly amount being distributed under the SURE-P Programme was no more because of the fall in oil prices.

He said that due to that, the states would like to appeal to the president to allow the scrapping of the Subsidy Reinvestment and Empowerment Programme.

He said that most states were in heavy debt and if the programme was scrapped, it would mean more allocation to them to enable them to pay salaries and complete relevant projects.