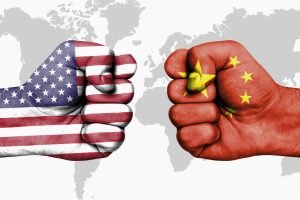 London — Oil prices rose more than 2% on Friday, regaining some ground after their biggest falls in years on U.S. President Donald Trump’s threat to impose more tariffs on Chinese imports.

The move, due to take effect on Sept. 1, intensifies a trade war between the world’s top two economies and oil consumers that has disrupted global supply chains and roiled financial markets. Any resulting economic slowdown could dent oil demand.

Thursday’s slide ended a fragile rally built on steady drawdowns in U.S. inventories, even though global demand looked shaky due to the trade dispute.

“Given the latest turn in U.S.-Sino trade relations, sustaining this uplift may be subject to how China chooses to respond to President Trump’s new tariff initiative”, said Harry Tchilinguirian, global oil strategist at BNP Paribas in London.

“The rise in oil prices may be simply the result of a technical bounce back from an oversold close,” he told the Reuters Global Oil Forum, referring to Thursday’s tumble.

Trump said on Thursday he would impose a 10% tariff on $300 billion of Chinese imports and could raise tariffs further if China’s President Xi Jinping failed to move more quickly to strike a trade deal.

The announcement extends Trump’s tariffs to nearly all of China’s imports into the United States.

China said it would not accept any “intimidation or blackmail” and pledged countermeasures should the tariffs go into effect.

The U.S. economy expanded by 2.1% in the second quarter, government data showed on July 26, beating economists’ expectations although it was lower than first quarter growth.

Still, there are signs of the economic toll of the trade dispute between the United States and China, which this week reported slowing manufacturing activity in July.