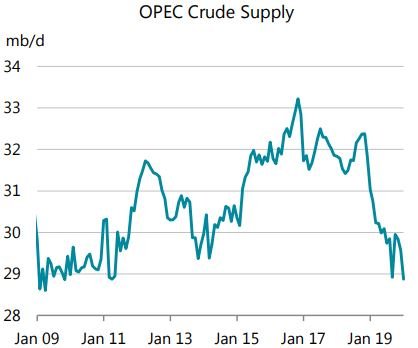 LONDON — Oil prices rose on Friday and held on track for their first weekly gain since early January as investors bet the economic impact of the coronavirus would be short-lived and hoped for further Chinese central bank stimulus to tackle any slowdown.

“It would seem in our view that the oil price is on a more positive footing in the past couple of days, with improved sentiment reflected in Asian equity prices holding up,” said BNP Paribas analyst Harry Tchilinguirian.

More than 1,350 people have died from the coronavirus in China, which has disrupted the world’s second largest economy and shaken energy markets. Brent has fallen 15% since the beginning of the year.

However, market sentiment improved as factories in China started to reopen and the government eased its monetary policy.

The World Health Organization also reassured traders by saying the big jump in China’s reported cases reflected a decision by authorities to reclassify a backlog of suspected cases, and did not necessarily indicate a wider epidemic.

Some officials and analysts were still hopeful that the demand impact would remain limited to China.

“Our baseline thesis remains that oil demand destruction remains largely a China story and has yet to spill over to impact global demand,” said Helima Croft, head of commodity strategy at Citadel Magnus.

U.S. Energy Secretary Dan Brouillette also told Reuters the coronavirus epidemic in China has had a marginal impact on energy markets and is unlikely to dramatically affect oil prices even if Chinese demand falls by 500,000 barrels per day.

The International Energy Agency (IEA) said that first-quarter oil demand is set to fall versus a year earlier for the first time since the financial crisis in 2009 because of the coronavirus outbreak.

“Given the strength seen in the market this week, it suggests participants were factoring in even larger demand hits as a result of COVID-19 (the coronavirus),” said ING analyst Warren Patterson.

In response to the demand slump, the Organization of the Petroleum Exporting Countries (OPEC) and its allied producers, a grouping known as OPEC+, are considering cutting output by up to 2.3 million barrels per day.

“The decision ultimately rests with the Kremlin, and if favourable, then we are likely to see a relief rally in oil, arguably mitigated by recent U.S. dollar strength,” said Tchilinguirian.