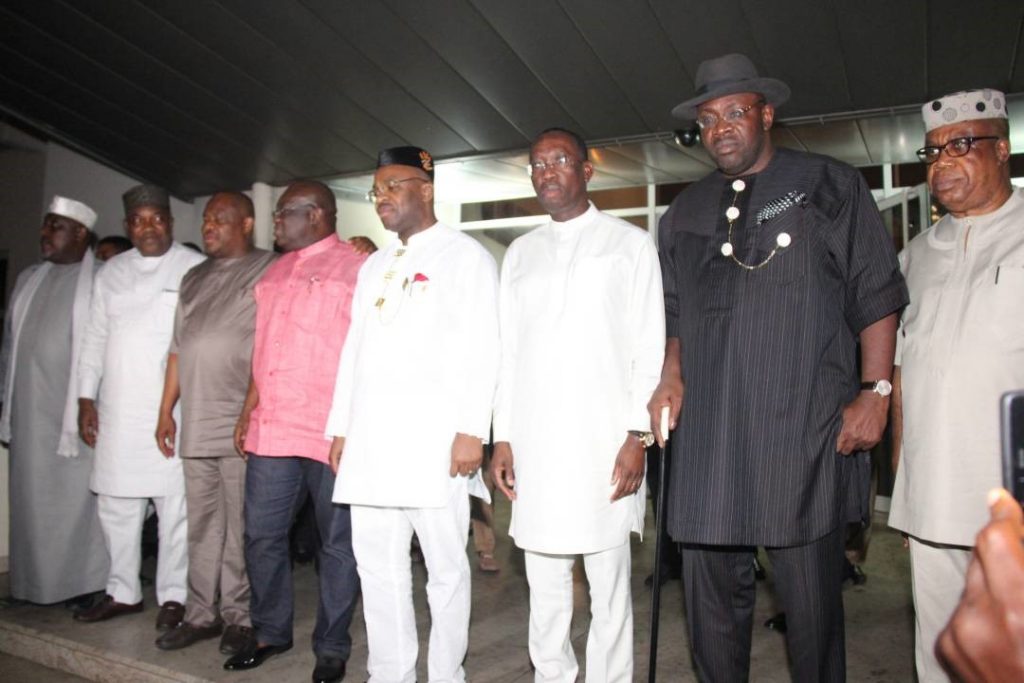 *Governors of the South-south & South-east at a meeting in Uyo.

28 November 2017, Sweetcrude, Port Harcourt — The South-South and South-East Governors have called for the improvement of the monthly Federation Allocation to states to reflect the rise in oil prices and production.

The Governors under the auspices of South-South and South-East Governors Forum made the request during its meeting at the Government House, Uyo in Akwa Ibom State.

Speaking, the Interim Chairman of the Forum and Governor of Akwa Ibom State, Udom Emmanuel, maintained that allocations to states should increase following the improvement in global oil prices.

“While our collective resolve for an indivisible Nigeria remains a cherished response, we wish to appeal to the Federal Government to demonstrate transparency in the area of allocation of resources to different parts of the country.

“It is indeed worrisome that allocations from the Federation Accounts do not seem to reflect the increase of crude oil production and improvement in oil prices.

“If our people suffered on account of the slump in global oil prices, the rise in the oil prices should not only improve allocations to the states to enable the governors to meet the expectations of their people, it will also help the states to develop in the areas that the Federal Government has been unable to reach out to the states. ”

Governor Udom said as long as the two regions consolidate cooperation, it will enhance their bargaining power in the country.

He said those who appear threatened by what the cooperation can achieve have been secretly working to create division in the forum.

The Forum Chairman expressed happiness that there is a great commitment to overcome the challenges of disunity that affected cooperation in the past.

“Facts indicate that the formation of this body was long overdue. That it has finally come is a testimony to a renewed strategy that is a template with global best practices.

“The cooperation we are rapidly building, the forthrightness we are exuding in our collective challenges is reassuring. I am confident that our people will be better for it.

“In our previous meetings, we identified some of the problems which include, the dearth of infrastructure in both regions, the rising tide of agitation in different parts of the country, the call for restructuring and issues of security. “