In oil-producing Iran, renewables are booming 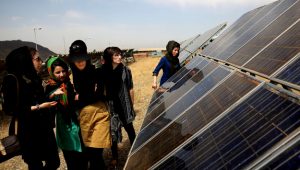 *Renewable energy is booming in Iran.

19 October 2017, Oslo — Renewable energy is booming in Iran, where installed capacity is expected to grow at least seven-fold over the next five years, despite U.S. President Donald Trump’s more confrontational attitude towards Tehran.

That gives Iran agreements with 124 companies, most of them European, to install 2,380 megawatts (MW) in renewable capacity, in addition to the 340 MW currently in place, according to data from Iran’s Energy Ministry.

They range from wind power to solar farms and hydropower dams to burning biomass and waste to heat homes. Iran is a signatory of the 2015 Paris climate agreement committing 195 nations to limit their carbon emissions.

“Iran is trying to increase the share of renewable energy in the energy mix of the country and also (honor) our international environmental commitments,” Fareeh Bahrami, an official at SATBA, the state agency promoting renewables under the authority of Iran’s Energy Ministry, told Reuters.

Iran’s ambition is to install 5 gigawatts of renewables by 2022, he said.

Among the companies engaged is Polish investment fund Quercus, which will help build the world’s sixth-largest solar farm in central Iran, investing over half a billion euros.

Dutch energy firm Global Renewables Investments (GRI) plans to build up solar and wind farms that could produce up to 1.7 GW of electricity.

“We have been approached by a number of finance providers, especially from the Far East, including China, proposing various options for construction and financing,” Quercus CEO Diego Biasi told Reuters.

However, the United States is taking a harder tone towards Iran lately. Trump said on Friday he may ultimately terminate the 2015 nuclear deal, which could mean some international sanctions may be restored.

As a result, some companies already invested in Iran said they would be taking a “wait-and-see” approach, such as Greek conglomerate Mytilineos Holdings, which built a 10 MW solar farm in Iran.

Others said they would continue with their investments, including Quercus and GRI. “We won’t change our strategy on Iran,” GRI co-founder Gerben Pek told Reuters.