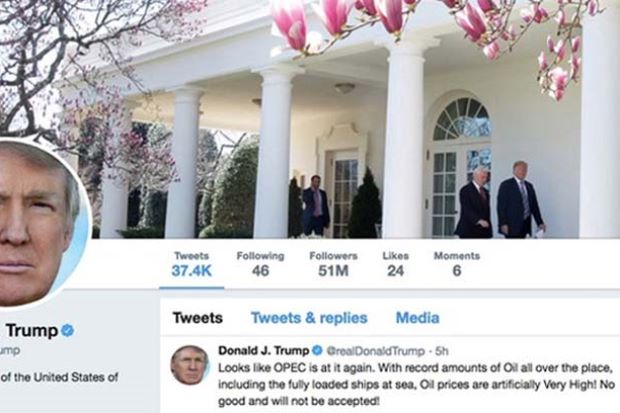 “Looks like OPEC is at it again,” Trump tweeted.

“With record amounts of Oil all over the place, including the fully loaded ships at sea, Oil prices are artificially Very High! No good and will not be accepted!”

Since early 2017, the Organization of the Petroleum Exporting Countries and its allies have curbed output in the hopes of eliminating a global oil glut.

Prices held up, even under Trump’s comments, said Walter Zimmerman, the chief technical analyst at United-ICAP.

“Oil looks like it wants to explore the upside a little more,” Zimmerman said.

OPEC Secretary-General Mohammad Barkindo said that the organization does not have a price objective, but that it is working to restore stability to oil markets.

Earlier this week, both Brent and WTI hit their highest levels since November 2014, at $74.75 and $69.56 per barrel respectively, buoyed by geopolitical risk and a tightening market. For the week, both benchmarks gained over 1 percent.

“The only thing [Trump] can really do is drain the SPR (Strategic Petroleum Reserve). Now, I have not seen any indication that the administration plans on doing that,” said Bob Yawger, director of energy futures at Mizuho in New York.

If Trump does start discussing the possibility of draining the strategic petroleum reserves, or SPR, that would pressure prices, Yawger said.

“We have a difficult time seeing how OPEC would in any way be swayed here in terms of changing course, in terms of policy,” said Michael Tran, commodity strategist at RBC Capital Markets.

Trump has recently been a bullish factor for oil, Tran said.

“One of the major variables fueling the rally in oil prices is the market’s perception that his administration is taking an increasingly hawkish stance on foreign policy,” he said.

The United States has until May 12 to decide whether it will leave the Iran nuclear deal, which would further tighten global supplies.

U.S. drillers added oil rigs for the third consecutive week in the week to April 20 bringing the total count to 820, the highest since March 2015, according to General Electric’s Baker Hughes energy services firm.