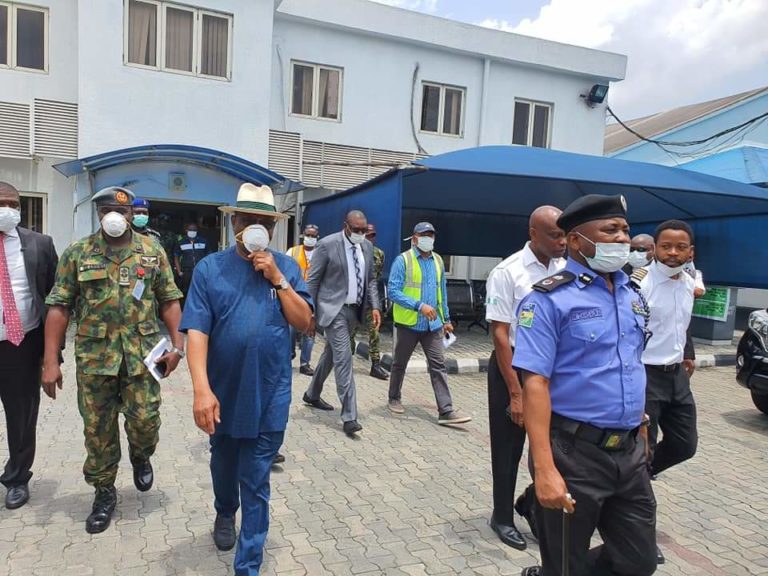 *Wike shuts down Caverton Helicopters for violation of movement.

Port Harcourt — The squabble between the Federal Government and the Rivers State Government over the arrests and remanding of two pilots of Caverton Helicopters, for transporting oil workers into the State, could have been avoided if Nigeria was practising true federalism.

Nigeria, for decades has prided itself as a federal republic, but in reality has been a unitary republic, as all economic sectors that make a country to progress, have been kept under the exclusive list of the federal government, instead of being in the residual list for control by the federating units.

Whereas in a federal system as practicable in countries like the United States only few sectors like defence, immigration and foreign relations are controlled by the central government in Washington, while every other aspects of the economy are controlled and regulated by the federating states.

But in Nigeria the story is different, as every sector is controlled by the central government including power, aviation, mineral resources, maritime, police, transportation, finance, tertiary education etc, including other strategic sector like defence, immigration etc.

This explains why experts have asserted that funds will continue to be misappropriated at the centre, as there is so much money under its control from the federating units, which ordinarily should have been at the units for rapid development.

True federalism is a system which allows federating units to grow at their own pace, as each unit is spurred to generate revenue by itself for her development and then pay considerable tax to the center, whereas in Nigeria, each federating unit are forced to lazy about while waiting for a monthly allocation from the center.

Perhaps, this explains the bickering between the Federal Government and the Rivers State Government over the arrests and remanding of two pilots of Caverton Helicopters, for transporting oil workers into the State, amidst the lockdown in the state over Corona Virus pandemic.

In the wake of the ravaging COVID19 pandemic in the country, the Rivers State Government had issued an executive order, closing down all its borders including, land, air and sea, to curb the spread of the virus in the country.

But the Federal Government needs revenue this time more than ever, so that the federating units can continue to receive their monthly allocations and also to fund the 2020 budget, especially as the global prices of oil continue to decline.

Thus, when Caverton Helicopters flew in oil workers into Rivers State last Tuesday, the state governor, Nyesom Ezenwo Wike, in a swift reactio had rushed to get the pilots arrested, arraigned and remanded, as according to him, he was not communicated the health status of the passengers.

Governor Wike, is maintaining that the highly insensitive and provocative actions of Caverton Helicopters took place in the midst of credible intelligence reports about plans by enemies of the state to traffic carriers of the dreaded Coronavirus into the State.

“However, we shall not welcome businesses or companies that value their business activities or profit more than or in clear disregard of the lives and health of our people.

“By its actions Caverton Helicopters have clearly shown that Rivers lives do not matter to it. It is an enemy of Rivers people and is hereby declared persona non grata in Rivers State.”

Whereas, the Minister of Aviation, Mr. Hadi Sirika, has explained that Caverton’s operation was indeed approved by the Federal Government as it was in line with national interest, to boost oil revenue.

“All of those flights are for the purposes of improving the national revenue to which Rivers State is the greatest beneficiary.

“At a time when oil has gone below $30, and the cost of production is $30, in the wisdom of President Muhammadu Buhari, he thought that this be allowed even in this national pandemic, so that the nation will not be crippled.”

Stakeholders, experts and industry watchers believed that there should be a synergy and collaboration between the Federal government and the Rivers State Government, as the current muscle flexing between the two tiers, was unnecessary.

From the legal point of view, a Legal Practitioner and Public Commentator, Barr. John Owubokiri, said the Federal Government erred in approving the said flight, without taking into consideration the health status of the passengers.

Owubokiri maintained that oil revenue was not more important than the health concerns of the citizens, especially since these revenues do not translate to adequate benefit to the people.

“Oil money is not more important than peoples’ lives especially as the people do not ultimately enjoy any benefits from the oil money.

“The FGN was monumentally wrong in approving such a journey without subjecting the passengers and crew to thorough screening and giving the state pre-information of the flight in order for the state to carry out screening and putting them under observation for a given number of days.

“As usual where there are tiers of government there is irresponsible muscle flexing like the Caverton incident.”

Meanwhile, a Community Development Expert, Mr Pat Obiene, says since Nigeria runs a mono-economy, it will be difficult to separate the value or important of lives in Rivers State from the importance of oil operations.

“Therefore in view of the prevailing circumstance, I expect the Rivers State Government to built a proper collaboration in checking these local or foreign oil workers flying from all parts of the world into the state.

“This would have been effective if there was proper administrative communication between the relevant Federal Government agencies and the Rivers State Government on control of covid19.

Obiene also said the Rivers State Government went too extreme in its action, as such was capable of discouraging investors into the state. He said the Government must be sensitive, considering the value of its major source of revenue and measures against COVID19.

“Besides I’d thought the punishment against the pilots would have been similar to the discretion of the Lagos State High Court, which handed down community service plus payment of fine recently to some offenders of government measures against COVID19.

“In fact, right now the Lagos State Government intends to withdraw the charges since the offenders have shown remorse. Because if we look at it critically there is no spelt out punishment in the so called law the government is referring to.

“The Rivers State Government took the Caverton offenders to court and at the same time shutting down Caverton offices, declaring them persona non grata. Is Governor Wike the law court?”

An Economist, Mr Nathaniel Friday Udoh, said Governor Wike as the Chief Security Officer of Rivers State, did not act unconstitutionally, as the Federal Government must also be held accountable for its role in securing national assets.

Udoh said there was no loss in oil production as insinuated by the Aviation Minister, since the bulk of Nigeria’s oil operations are in the offshore, since the Niger Delta sits directly on the Gulf of Guinea, much of crude oil exploration and production ares in the deep and ultra-deep waters.

“There is no loss in production since to my understanding oil companies develop their program to accommodate redundancy, in case of any threat from any spectrum ensuring that their operation is not completely short down.

“Therefore, no revenue loss to FG as insinuated by Minister of Aviation, except Caverton would loss its earnings to Bristow Helicopters which is not also good for the State’s Internally Generated Revenue. Though Wike is right, yet he must adopt a soft patch disposition at handling the matter even without legislation to guarantee Caverton partial operation even under the Rivers State’s executive order.

“Aside from the constitutional right of the governor through Section 1 (2), 14 (2) (a),(b) and (c), Wike must have been mindful of any downtime cost given further disruption in state economy. Risk remains a function of probability same as incidences; for the governor to accept risk, seems best measures or game to have been played than accepting failure probability.

“The operator have benefits of rendering partial services to its client or to the public. But there must established an understanding between the company and Rivers State government, as well as communication opened across the two tiers of government.

“Accordingly, FG should reach out for a political solution ensuring the speedily release of the held crew. Also the governor must assumed the crew members innocent for accepting the assignment without any intention to suffocating any extant law.

The Economist also said it was instructive to dedicate responsibility of handling COVID-19 to the office of National Security Adviser for effective coordination and accountability, since the pandemic has more of economic and security consequence.

“This will assist them to mobilize experts within and outside the contra for effective handling or deployment of full spectrum response. Again, engagement of Chinese doctors is not necessary, except on areas that Nigerians experts in country and outside the country are not there to handle.”

For President of the Ijaw Youths Council, Eric Omare, the outburst between the two tiers was needless, as there should be a collaboration between the duo.

“Well, I don’t have the security information that led to Wike’s action. But I think that at times like this there is time for inter government and agency cooperation. I don’t think there is any need for the outburst between the Rivers Government and the Federal Government. What is required is cooperation and not to antagonize each other.”

States have power in a federation
Meanwhile, the Rivers State caucus at the National Assembly have berated the Minister of Aviation, Hadi Sirika, for not understanding the meaning of a Federation, saying that the Minister may have an ulterior motive to expose the citizens to danger and death from the COVID19 pandemic.

Senator George Sekibo and Hon Kingsley Chinda, said Covid19 is a global pandemic, hence it was wrong for Caverton helicopters to ferry passengers into Rivers State from unknown destinations, without any declaration of their Covid-19 status and or prior information to the state for its health officers to be on ground.

“This action no doubt endangered the lives of the citizens and all those residing in Rivers State and is contrary to the executive orders RVSG-01, 2020 Made pursuant to sections 2,4 and 8 of the Quarantine Act, Cap. Q21 Laws of the Federation of Nigeria 2004 and Regulation 11 of the Quarantine (Corona Virus (Covid-19))and other infectious diseases regulations 2020.

“It is equally sad and heart wrenching that the Minister’s attempted justification of his desire to open the doors of the death unto Rivers State and its people, is to enable the unhindered flow of oil revenue for a central Government that has continuously treated the people with so much disdain.

“We would had expected that the Federal Government would be more interested in protecting the people and have better communication in pursuing whatever interest. More insulting to the sensibilities of Rivers people is the disdainful claim by the minister that Rivers State benefits more from the proceeds of oil operation.

“That to us as Representatives of Rivers people is like spitting on our graves as you discretionally give us a percentage of our resources in a Federation and expect us to be grateful to you. It is also very pertinent to put on record that this is indeed not the first time the management of Caverton Helicopters is being treacherous with Rivers State and her citizens.

“All essential services are allowed to operate subject to the safety of lives of our citizens. Love Rivers State or leave her alone. ”

This scenario could not have occurred if the federating units in an acclaimed federal republic are made to practice true federalism, just the same way President Donald Trump cannot be concerned about flying oil workers into Texas for oil production, since such is the responsibility of the governor of Texas.