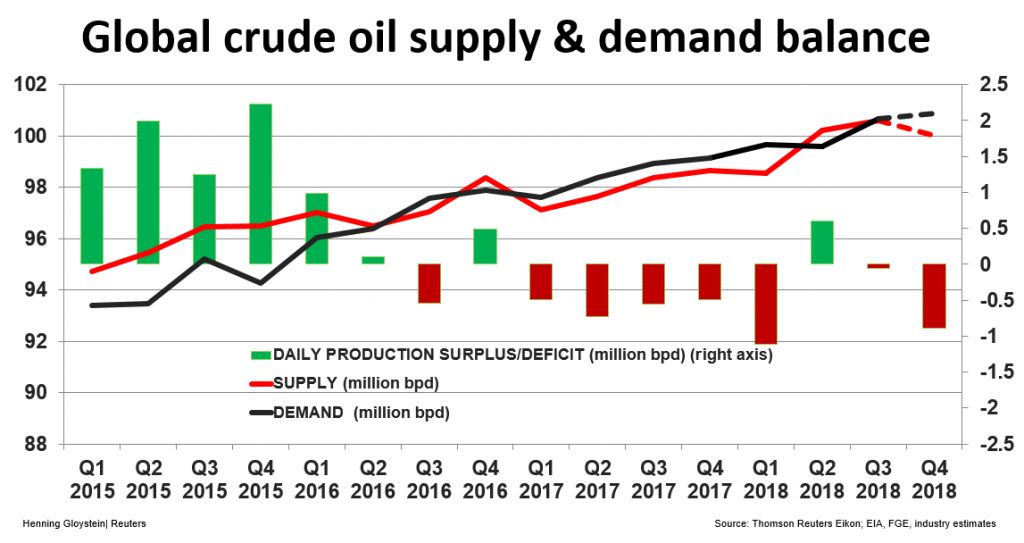 25 August 2018, New York — Oil prices gained more than 1 percent on Friday, ending a run of weekly declines on signs that Iran sanctions may limit global supply and that a trade war may not curb China’s appetite for U.S. crude.

U.S. crude rose more than 4 percent on the week, after seven consecutive declines, and Brent rose 5.3 percent after three weeks of falling prices.

“Both crude markers are on track to end a steady run of weekly declines. This is largely due to a tightening fundamental outlook on the back of looming Iranian supply shortages,” said Stephen Brennock, analyst at London brokerage PVM Oil Associates.

Concerns that an escalating trade war between China and the U.S. could slow economic growth and weigh on crude purchases eased slightly after sources told Reuters that China’s Unipec will resume purchases of U.S. crude oil in October, after a two-month halt due to the fight.

Worries that Mexico’s incoming administration would not strike a bilateral agreement over NAFTA with the U.S. also weighed on the market, traders said. A dispute over opening up the oil and gas sector is weighing on the talks, Bloomberg reported, citing two people familiar with negotiations.

At the same time, concerns about global crude supply intensified with signs that U.S. sanctions on Iran are curbing shipments.

The U.S. government reimposed sanctions on Iran this month after withdrawing from a 2015 international nuclear deal, which Washington saw as inadequate for curbing Tehran’s activities in the Middle East and denying it the means to make an atomic bomb. Tehran says it has no ambitions to make such a weapon.

Iran is the third-biggest producer in the Organization of the Petroleum Exporting Countries, supplying around 2.5 million barrels per day (bpd) of crude and condensate to markets this year, equivalent to about 2.5 percent of global consumption.

“Third-party reports indicate that Iranian tanker loadings are already down by around 700,000 bpd in the first half of August relative to July, which if it holds will exceed most expectations,” U.S. investment bank Jefferies said on Friday.

“We expect that by Q4 the market will be dealing with either undersupply, dwindling spare capacity – or both,” it added.

The dollar index served as a tailwind, said Bob Yawger, director of futures at Mizuho in New York. A key index of the dollar versus a basket of other currencies .DXY fell on Friday, boosting the price of oil and other dollar-denominated commodities.

Traders kept an eye on the North Sea, where workers on three oil and gas platforms plan to strike next month. Oil production will stop during the strikes. The three fields contribute about 45,000 to 50,000 bpd to the North Sea’s Forties and Brent crude streams.

Hedge funds and other money managers cut their bullish wagers on U.S. crude futures to the lowest level since mid-June.

The speculator group cut its combined futures and options position in New York and London by 15,723 contracts to 341,132 in the week to Aug. 21, the U.S. Commodity Futures Trading Commission (CFTC) said on Friday. The level was the lowest since the week ended June 19.

Intercontinental Exchange (ICE) Brent crude speculators 3ICELCOMNET cut their net long positions in the week by 11,985 to 324,431, the lowest in more than a year.