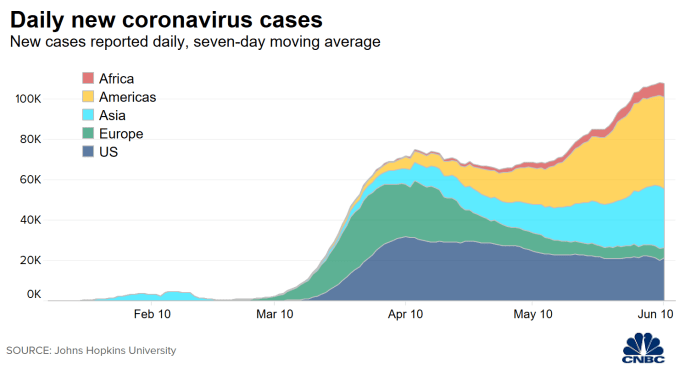 LONDON — Oil prices edged higher on Friday but were on track for their first weekly fall in seven as new U.S. coronavirus cases spiked, raising the prospect of a second wave hitting demand.

The oil benchmarks are heading for weekly declines of more than 8%, their first after six weeks of gains which have lifted them off their April lows.

Fears that the coronavirus pandemic may be far from over has brought the rally to a halt, with about half a dozen U.S. states seeing a spike in new infections.

Barclays on Friday raised its oil price forecasts for this year by $4 per barrel, citing a bigger deficit in the second half of the year, although it expressed caution on a slow recovery in the near term.

“The rate of change in fundamentals is likely to moderate significantly as incremental demand improvement will depend more on consumer behaviour than the easing of enforced movement restrictions,” the British bank said in a note.

Producers from the United States, as well as from the Organization of the Petroleum Exporting Countries (OPEC) and its allies, a group known as OPEC+, have been cutting supply.

OPEC+ cut oil supplies by 9.7 million barrels per day (bpd), about 10% of pre-pandemic demand, and agreed last weekend to extend the reduction.