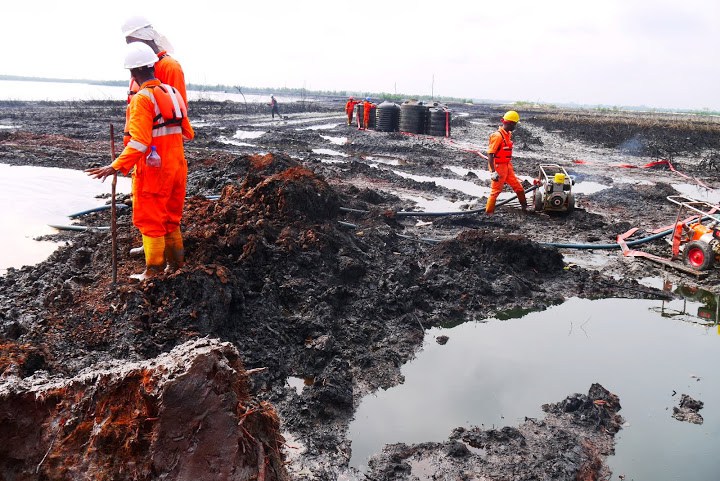 17 March 2018, Sweetcrude, Lagos — Amnesty International has accused both Shell and Eni of being negligent in their responses to oil spills in the Niger Delta.

In a statement issued by the body, it described their (Shell, Eni) actions as “serious negligence”.

According to AI, the international oil companies take weeks and sometimes years to respond, as well as not providing accurate information about the true state of the spills.

“…taking weeks to respond to reports of spills and publishing misleading information about the cause and severity of spills, which may result in communities not receiving compensation”.

The Niger Delta locals have for decades, accused Shell and Eni of being responsible for oil spills which have polluted their waterways and farmlands, killing their plants and fishes which are their major sources of income.

However, both Shell and Eni who are among the most active oil exploration and production companies in the Niger Delta region have not accepted full responsibility for the oil spills in the area.

Both firms have also accused the locals of being complicit in the act, especially vandalism of the pipelines.

While oil companies frequently attribute spills to sabotage and theft, locals say they are often due to other issues such as corrosion.

As a result, Eni and Shell have been ordered by international courts to clean-ups and offer compensations to the victims of the spills.

Yet Shell said clean-ups, and the compensation has been dogged by controversies and contentions as some local communities bar its teams access to spill sites, allowing the damage to worsen, in the hope of extracting bigger pay-outs from the company.

Under Nigerian law, companies must visit sites within 24 hours of reporting a spill.

However, Amnesty cited an occasion where Eni took more than a year to respond to a spill in Bayelsa state.

Shell has reported 1,010 spills since 2011, and Eni 820 since 2014, according to Amnesty, which said among those 1,830 reports it found 89 “about which there are reasonable doubts surrounding the cause provided by the oil companies”.

In 2015, the Bodo community and a British law firm negotiated a 55 million British Pound Sterling pollution settlement with Shell.

Responding to the allegation, a spokesperson for The Shell Petroleum Development Company of Nigeria Ltd (SPDC) told SweetcrudeReports that “The allegations levelled by Amnesty International are false, without merit and fail to recognise the complex environment in which the company operates where security, a sole prerogative of Government, remains a major concern with persisting incidents of criminality, kidnapping, vandalism, threats from self-described militant groups. As the operator of a joint venture, where the government-owned Nigerian National Petroleum Corporation has a majority interest, SPDC continues to work with federal and state government agencies, communities and civil society to create a safe operating environment.

“SPDC, in collaboration with government regulators, responds to spill incidents as quickly as it can and cleans up spills from its facilities regardless of the cause. We regularly test our emergency spill response procedures and capability to ensure staff and contractors can respond rapidly to an incident. However, response to spills, clean-up, and remediation depend on access to the spill site and ultimately on the security of personnel and equipment while work is ongoing.

“SPDC reiterates its commitment to carrying out operations in line with best practice in a responsible and environment-friendly manner.”