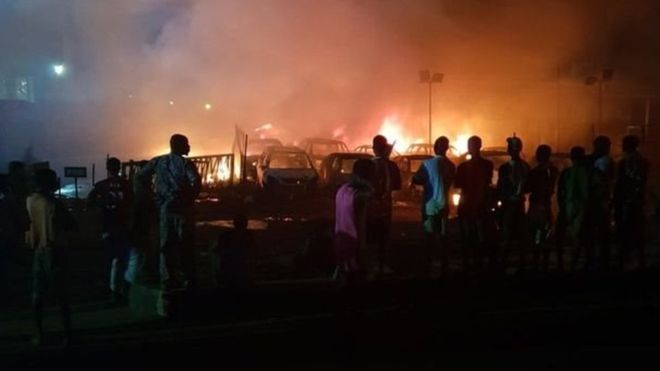 *Onlookers watch helplessly at the scene of the Abule Egba fire incident.

19 December 2018, Sweetcrude, Lagos — An oil spill at Oko Oba road, around Tipper Garage, Agege, on Wednesday, has resulted in the loss of properties worth millions of Naira, SweetcrudeReports has gathered.

According to eyewitnesses account, the explosion had occurred as a result of oil spill following suspected vandalism of an oil pipeline, leading to spillage.

Although uncountable houses, cars, and offices worth millions of Naira were destroyed by the inferno, however, no life was lost.

When SweetcrudeReports visited the site, some residential and commercial houses were seen affected in the fire which began at about 3.30 am.

An explosion from the pipeline could be seen to have extended to Abule Egba Bus Stop.

Men of the fire service were seen arriving in few trucks hours after the fire incident had razed down many properties in the area, causing a hectic gridlock of vehicles and pedestrians.

The Lagos State Emergency Management Agency, LASEMA’s response unit in an early morning tweet on Wednesday, confirmed the explosion occurred due to bunkering activities in the area.

According to LASEMA, the fire was triggered by the bunkering activities contact with an ignitable source.

A situation report read;
“The impact resulted in inferno as it ravaged several houses and cars at the incident scene. Lagos Fire Servicemen and LRU firemen are on ground to combat the inferno in order to curtail the further spread to adjoining buildings and also the nearest Filling station…LASEMA.

True to LASEMA, fire rescue teams such as NSCDC were spotted queling what was left of the fire, while at the same time barricading the affected places against intrusion by the public.

Some of the residents whose properties were affected in the fire spoke to SweetcrudeReports.

One Mr. Adeleye who happens to be a tenant said it would be difficult to get through the loss.

“although I thank God for life yet, it will be tough. All my properties got burnt. I couldn’t even go to work today. I’m confused “, he said.

SweetcrudeReports gathered that no arrest of the vandals has been made, as they had escaped before anyone could get a grip on who they were.

Another resident affected in the loss narrated how his family was able to escape with just the clothes on their backs.

“We were deeply asleep when we started hearing people shouting outside. By the time we got outside, we saw everywhere scattered, people running around. We were confused. We didn’t know whether to start rescuing our properties or to save our lives first. But then we wouldn’t have been able to escape with our properties due to the fire. But we are alive. We lost everything. This Christmas will be very tough “, Mr. Ogunwusi said.

The loss would have been worse if not for the bricks that barricaded the road, some of the residents said.

Shops located along the roadside, commercial buses and personal vehicles on the road were not at all spared from the angry fire.
Several cars, houses and offices around Awori, garage bus stop and some parts of the abattoir were also destroyed.

Tajudeeen Salako, another resident, said the leakage started from pipeline at Awori, leaking through the drainage until the abattoir.

He called on government to come to the rescue of the residents and those affected, to fish out the perpetrators, likewise assist with perlative measures.