on: February 08, 2019In: Community Development, featured 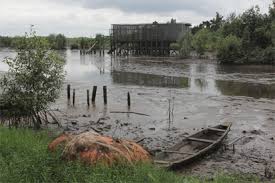 08 February 2019, Sweetcrude, Port Harcourt — The Shell Petroleum Development Company of Nigeria, SPDC, says the company is not in any way frustrating any post-JIV activities including negotiation for the payment of compensation to Aghoro community in Bayelsa State, following the Trans Ramos Pipeline spills of May 2018.

The oil multinational stated this while reacting to allegations raised by legal counsels to Aghoro community in Ekeremor LGA of Bayelsa State, accusing SPDC of frustrating the compensation procedure for the Trans Ramos Pipeline oil spill which occurred on May 17th, 2018.

Media Relations Manager, SPDC, Mr. Bamidele Odugbesan, who denied the allegations raised by the community, said told our correspondent that Shell was not in any way frustrating the community’s efforts to get redress.

“SPDC is not frustrating any post-JIV activities including negotiation for the payment of compensation,” Odugbesan said.

It will be recalled that on May 17th, 2018, a leak on the Trans Ramos Pipeline spilled over 1,000 barrels of crude oil into Aghoro creeks. The oil spill which occurred at an oilfield operated by SPDC had impacted and polluted an estimated area of 113.03 hectares.

A joint Investigation Visit, JIV, report of the incident had concluded that the leaks on the pipeline at three spots were caused by equipment failure.

But the community had last week alleged that SPDC was frustrating the community’s efforts to get redress following established templates of computing spill compensation rate based on the volume of spill and damage assessment.

Legal consultant to the community, Furoebi Akene, in a letter to the Managing Director of SPDC, Mr. Osagie Okunbor, had claimed that officials of SPDC were frantically trying to breach scientific procedure in spills response.

Akene, who is the Principal Partner, FASF Associates, said rather than await the outcome of a joint post-impact and damage assessment being carried out by regulators, SPDC officials were foisting a negotiation method on the people before the assessment report.

He said that the post-impact assessment report being expected from National Oil Spills Detection and Response Agency, NOSDRA, was the only legitimate method of ascertaining the compensation due to the community.

According to him, “We are compelled to write you this letter due to the oppressive antics adopted by your company since the spill occurred till date as though you are above the enabling laws of this country where you operate.

“This letter also becomes inevitable against the sad backdrop of the fresh moves by officials of the SPDC in Port Harcourt led by the Head of Lands in pathetic disregard for due process and industry’s best practices.

“As the Managing Director and the Country Chairman of Shell Companies in Nigeria, you should take the path of honour as a patriotic citizen of this country and as someone who is law-abiding, direct your staff to act according to the laws.

“I also want to implore you to ask your company and her officials to stop all dishonest actions and simply allow the report of the NOSDRA led PIA and DA report to be the basis for any future discussions between SPDC and Aghoro-1 Community, with us as their properly nominated Consultants,” Akene said in the letter.