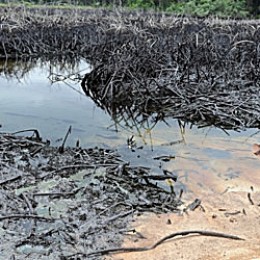 When we visited the street, Tuesday, it was deserted as only a few people were seen.

The gates of the buildings on numbers 17 and 30 on the street where the spillage was recorded were still locked.

Ayo Oke, who claimed to be one of the residents, said many of them had gone into hiding for fear of being arrested.

According to him, “The arrest of the landlord of the house where the spillage was noticed has instilled fear on the people. This is because the man noticed the spillage and reported to the Police. He was arrested along with some members of his household. Who knows the next person to be arrested? That is why many of us are in hiding. The government should resolve the issue quickly.”

Efforts to speak with the Depot Manager of the Nigerian National Petroleum Corporation, NNPC, Ejigbo, Dr. Tola Balogun, were unsuccessful.

However, in an earlier statement, Balogun said two samples of the leakage had been taken for laboratory test to ascertain the true nature of the spill.

He also said the spill was discovered in a well belonging to one Adedeji Ogunba, who reported to the police at Ejigbo when he noticed it, saying officials of the Nigerian Security and Civil Defence Corps, NSCDC, last Saturday, stormed the affected compounds and arrested the people, including a pregnant woman.

The recent oil spill is not the first in the area, as Baruwa Community, in Alimosho Local Government Area also experienced similar occurences in May 2012.