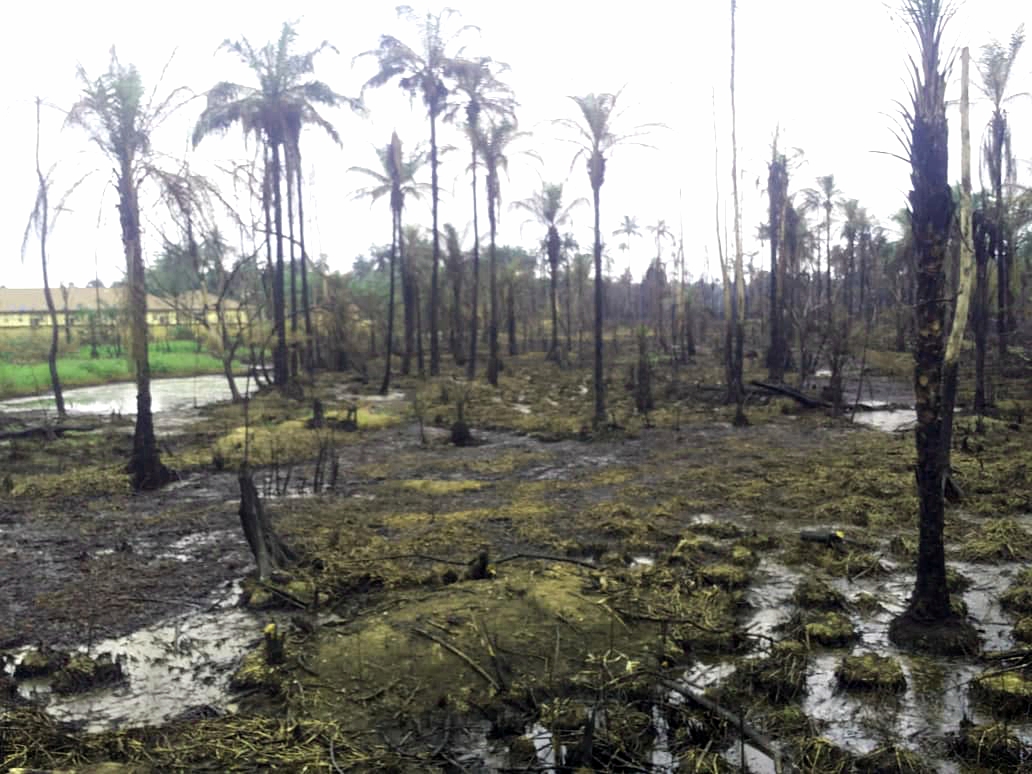 *A swampland in Okogbe community, heavily polluted by crude oil and fire disaster.

Port Harcourt — Victims of oil spills in Okogbe community, Ahoada West LGA of Rivers State, have demanded for justice over the spills incident from SPDC facility which destroyed their farms, houses and the surrounding swamplands.

In February 2021, fire caused by unrecovered oil spills from Okordia-Rumuekpe pipeline operated by SPDC in the area, engulfed the swamps of Okogbe to Akala-Olu communities, burning farms, houses and the swamp, for over three days.

The said oil spills reportedly occurred in December 2019, and was dispersed into the community, swampland and farms during the 2020 flood incident in the area.

Meanwhile, the Department of Petroleum Resources, recently carried out a joint inspection visit, made up officials of Shell, Agip, members of impacted communities and officials of the regulatory agency, to assess the spill.

Speaking, the leader of the DPR team, Mr. O. Imanze, said the inspection was not to trade blame on any stakeholders, but for comprehensive assessment, to ascertained the origin of the spill, the impact and possible clean up method.

Imanze assured that findings by DPR from the inspection, will be made available to all stakeholders, when it is ready.

Meanwhile, a victim of the oil spill, Dr. Patricia Ogbonnaya, has expressed optimism that DPR will prevail on SPDC to remediate the impacted area and compensate the victims.

Ogbonnaya who is the Ada Ekpeye Ologbo II, expressed satisfaction that a thorough inspection was carried out on her farm, which include 14 giant fish ponds, poultry farm, rabbitry, and economic trees including guava, palm trees, sour sop, coconut trees etc.

“We have been praying for this day to come and today, God has made it possible. Today, every stakeholder expected was present, including Shell, Agip, and Ekpeye communities that were impacted.

“Thorough inspection was done on my farm and the environs, and DPR confirmed just like NOSDRA, that indeed, there is unattended spills that spread across the area during the flood, which enhanced the fire that took place.

“Of course, if the oil spill was not there, the whole forest would not have been burnt that way.

“My expectation is justice, that the affected victims will get justice. The land should be cleaned and remediated and justice demands that compensation should be paid for properties and farms destroyed.”