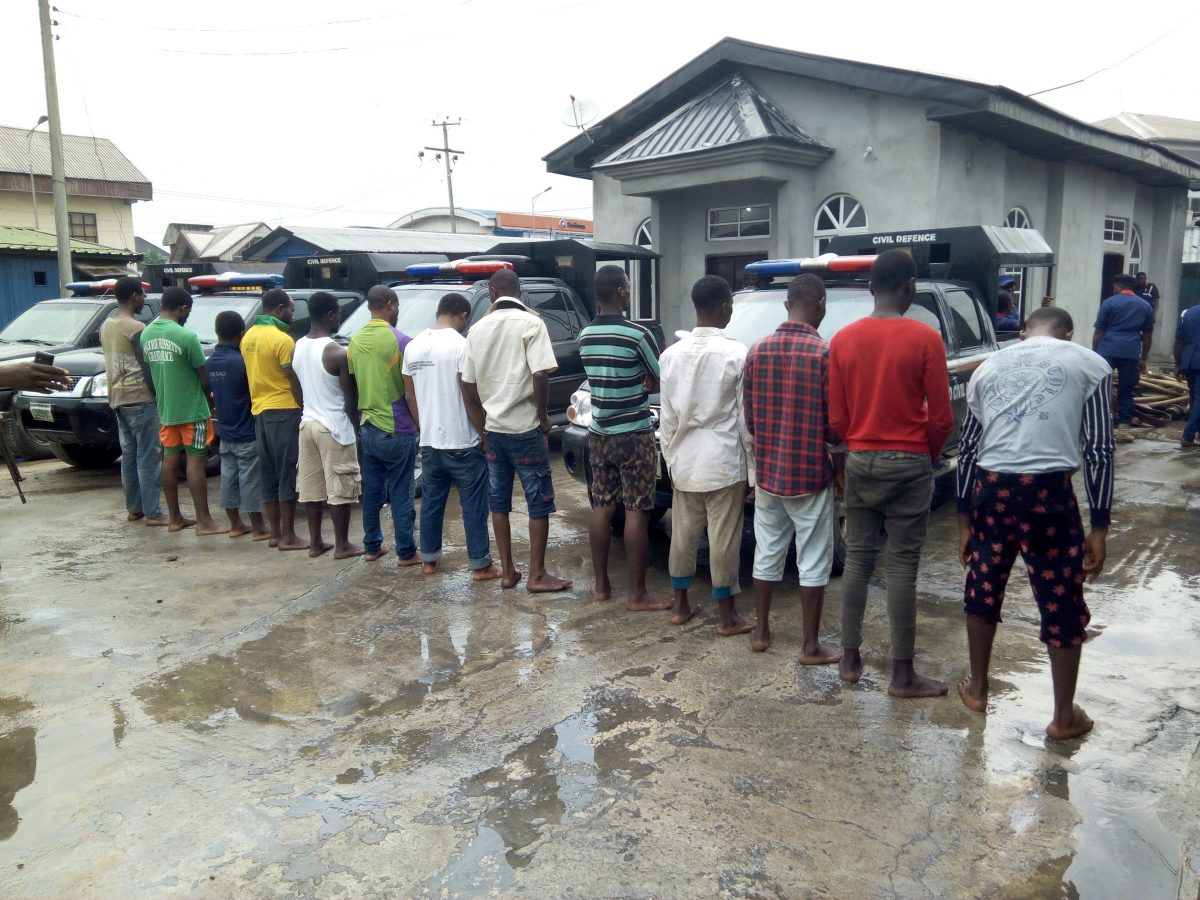 *Some of the suspects paraded at NSCDC, Rivers Command.

12 November 2017, Sweetcrude, Port Harcourt – The Nigerian Security and Civil Defence Corps, NSCDC, says it has arrested 33 suspected oil thieves and impounded 18 trucks filled with illegally refined petroleum products, within the last four months.
While parading some of the suspects in Port Harcourt, the Rivers State Commandant of NSCDC, Mr. Mohammed Haruna, said they were arrested in different parts of the state, with not less than 300,000 litres of illegally acquired products.
Haruna stated that the Command has also impounded a total of 10 cars and four buses loaded with jerry cans and drums of illegally refined  Automated Gas Oil, commonly called diesel.
He called on members of the public to join hands with security operatives in the fight against crude oil theft, bunkering and illegal refineries in the country.
According to him, “The anti-vandal team of the NSCDC in Rivers State have arrested 33 suspects involved in illegal oil business, the Corps also arrested 18 trucks, four cars, ten buses, and 200 tanks of 1000litres of AGO.
“Subsequently, on the 6th August 2017, three suspects and a 40,000litres truck with registration number DKA7032U Kaduna, conveying illegally refined AGO was also arrested by anti-vandal team along Oyigbo LGA.
“Along Abonima Wharf Road, four suspects were arrested with adulterated DPK and AGO contained in 109 jerrycans of 25litre capacity, eight drums on 6th September 2017; also impounded are one Golf car, three wagons with registration number Bayelsa KMR466XG, two Volkswagen with registration number MHA744XY and a Mitsubishi bus with registration number Lagos CL183KTU were apprehended.
“While on the 9th and 10th September 2017, three trucks; 40,000litres, 39litres and 33,000litres trucks with registration numbers KMC118ZQ, KMC126ZQ and BUK323XA Cross River, filled with crude oil and six suspects were arrested along Port Harcourt-Aba expressway.”
The NSCDC boss further disclosed that the the Command also discovered an illegal dumpsite at Igwurita axis of Ikwerre local government area of the state, with another 100 tanks of 1000litre capacity filled with adulterated AGO, adding that the kingpin of the dumpsite and his guards have been arrested and  are in the Command’s custody.
He stressed the need for a special court to try suspected oil thieves in a bid to pave the way for a quicker prosecution of suspects.
“On the 21 September 2017 tanker with registration number AD208A Borno, fully loaded with AGO and bus Volkswagen with six drums of AGO and 25litre gallons filled wuth AGO were intercepted by ant-vandal in Okrika Local Government Area.
“One Yamaha boat engine, Toyota Camry with registration number EPP555E loaded with AGO in 25litre capacity gallons were arrested by the Corps on 26th September 2017, along Ozuboko waterside behind the Port Harcourt Zoological Garden.
“Also along Port Harcourt-Aba expressway, 33,000 litres capacity truck with registration number XD18RBC filled with AGO were caught on 6th November 2017.
“Long truck with registration number XY923EKY carrying adulterated AGO was intercepted along Okrika road on 8th November 2017.”