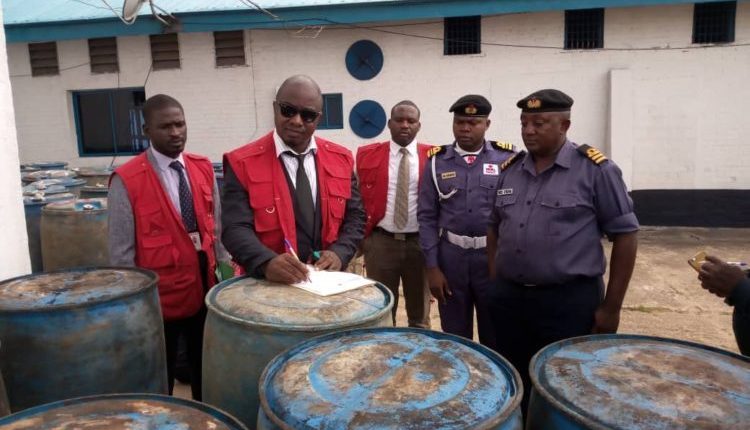 *Officials of the EFCC and Navy personnel with the intercepted petroleum products.

Port Harcourt — The Economic and Financial Crimes Commission, EFCC on Wednesday, took delivery of MV Gratitude, a bunkering vessel and its crew of six, intercepted on January 9, 2020 by officers of the Nigerian Navy, Forward Operating Base, Yenagoa, Bayelsa State.

The handing over, according to the Nigerian Navy, is for further investigation and possible prosecution by the EFCC.

The Commanding Officer, Forward Operating Base, Yenagoa, Commodore Suleiman Ibrahim, while handing over the vessel and crew, disclosed that that the ship was laden with 1,000,000 litres of locally refined Automotive Gasoline Oil, commonly called diesel.

He assured of the Navy’s determination to clear the waterways of illegal oil bunkering and sea pirates for legitimate business operators to thrive.

A Superintendent of EFCC, Tasiu Abubakar, who received the vessel and crew members on behalf of the EFCC, promised diligent investigation of the alleged crime.