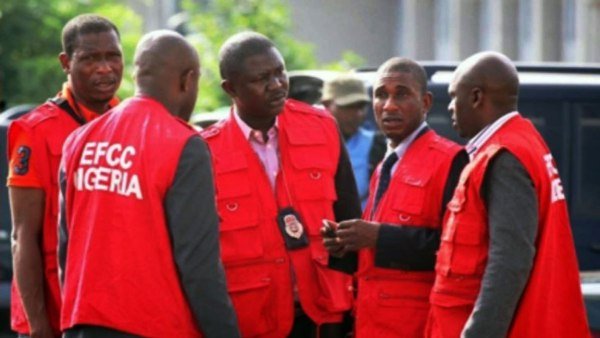 Port Harcourt — The Nigerian Navy Ship, NNS Pathfinder in Port Harcourt, has handed over three vessels and 16 suspects arrested in connection with oil theft and other maritime offenses in Rivers State, to the Economic and Financial Crimes Commission, EFCC.

Executive Officer, NNS Pathfinder, Captain Adegoke Ebo, disclosed that 14 suspects were caught stealing 224metric tonnes of illegally refined diesel, while two of the suspects where extorting money from unsuspecting members of the public for enlistment into the banned Nigerian Merchant Navy.

Ebo while handing over the suspects to EFCC in Onne, said that troops on routine patrol of creeks and waterways in Rivers State, caught the 14 men on board three vessels while trans-shipping illegally acquired petroleum products to two other vessels, without a permit.

He explained that after the seizure and arrest, the vessels and suspects were taken to the Naval holding bay in Onne, adding that the arrest and the handing over to a prosecuting agency was in line with the directive of the Chief of Naval Staff, Rear Admiral Ibok Ete-Ibas, to rid the country of oil theft and other maritime crimes.

According to him, “In line with the mandate of Nigerian Navy, NNS Pathfinder gunboats on patrol apprehended these three vessels, MV Pere Ipamo, MV Multi, and MV Loving-Kindness on May 6, 2019, at Onne anchorage in Rivers State, for carrying out illegal bunkering activities.

“At the time of their arrest, MV Pere Ipamo was caught in the act, carrying out the illegal ship-to-ship transfer of 224 metric tonnes of suspected illegally refined diesel into two other vessels.

“No fewer than 14 crew members on board the vessels were also arrested to aid our investigation.”

Executive Officer, NNS Pathfinder, Captain Adegoke Ebo, further disclosed that two other suspects were arrested for presenting themselves as operatives of the banned merchant navy and attempting to swindle Nigerians.

He expressed the determination of the Navy to make the country’s maritime environment safe and conducive for business, assuring that the Nigerian Navy is poised to achieving its mandate of stamping out crimes on Nigeria’s waterways.

“The arrest was premised on the fact that the suspects were conducting illegal coastguard recruitment without any form of documentation or authorization of the Federal Government. In fact, they had instructed their applicants to pay the sum of N100,000 into a bank account for the so-called illegal recruitment.

“Consequently, the two self-acclaimed suspects, Capt. Eke and Capt. Felix was apprehended by our troops on May 27, 2019, for conducting illegal coastguard recruitment, and investigations were carried on.

“In line with the directive with our headquarters, I am today handing over the three vessels and their crew members, 14 in number and these other two suspects to EFCC,” Capt. Ebo said

Receiving the suspects, the illegally refined diesel and the vessels, a Senior Detective Superintendent at EFCC, Mr. Macaulay Olayinka, described oil theft as a sabotage to the country’s economy, assuring that the suspects will not be spared.

Olayinka who commended the Nigerian Navy for its synergy with the Commission added that the anti-graft agency would conduct speedy investigation into the matter.

“I hereby take over from Nigeria Navy and I assured Nigerians that further investigations will be carried out and if found wanting will be prosecuted accordingly.

“We have had several of this case and prosecution is going on and I assured Nigerians that before the end of this year, we will have several convictions from other cases handed over to us from the Navy,” EFCC said.