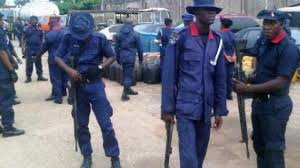 Port Harcourt — The Nigerian Security and Civil Defence Corps, NSCDC, says it arrested a total of 306 suspected oil thieves and pipeline vandals between January and December 2019.

NSCDC Commandant in Rivers State, Muktar Lawal, while briefing newsmen on the command’s achievements in 2019, said it also impounded 31 trucks, two barges, a tugboat and a vessel used in conveying adulterated products.

Lawal said the command has remained focused on the mandate of the Corps, despite strong wind of challenges posed by Militants, Vandals, miscreants and oil thieves in the state.

He said the command’s readiness to protect the country’s critical national assets and Infrastructure is non-negotiable, adding that cases of vandalism of oil facilities and was gradually reducing.

“Without fear of any doubt, I wish to say that the NSCDC is living up to expectation regarding checkmating the activities of economic saboteurs who vandalize the critical national assets and Infrastructure of this nation.

“In the bid to checkmate the excesses of oil theft in the state, the corps have arrested a total of 306 suspects this year, 31 trucks and 15 vehicles all loaded with suspected stolen petroleum products.

Lawal said the command secured 80 convictions in 2019, announcing that over 4000 personnel of the Corps have been strategically deployed in the state to ensure a hitch free yuletide.

“The command has recorded no fewer than 80 convictions so far this year in cases relating to illegal dealings in petroleum products, vandalism of petroleum pipelines, telecommunication facilities and PHED facilities in the state.

“Through the anti corruptions unit of the NSCDC, over 45 cases relating to corrupt/sharp practices amongst the general public were resolved within the year 2019.”