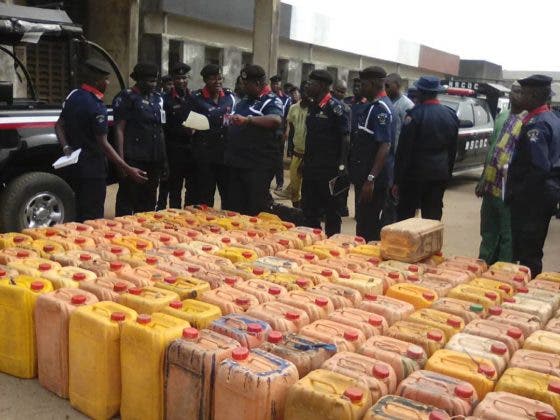 *NSCDC impounds gallons of adulterated AGO

The NSCDC also arrested one suspect, along with a salon car used in converying the products from an illegal oil dump in Rumuomasi area of Port Harcourt, Rivers State.

Public Relations Officer of NSCDC, Rivers State Command, Oguntuase Michael, who conducted newsmen round the illegal dump, said the Corps was working to ensure that illegal products do not find their ways to the market.

Michael, disclosed that NSCDC Commandant in Rivers State, Muktar Lawal, had constituted a special Anti-Vandal Team, specialised in identifying illegal dumps in the state, and will not rest on its oars against illegal bunkering.

“On Tuesday, 19th January 2021, the anti-vandal team of the Command arrested a suspect by name Mr. Ezike Shoke with a Volkswagen Jetta car loaded with suspected illegally refined AGO in 56 gallons, 25liters each, at an illegal dump situated at 34 Arochukwu Street, Rumuomasi in Port Harcourt City L.G.A of Rivers State.

“The illegal dump where the suspected products were seized is a residential area, making it unacceptable and dangerous for the residence of the area, due to the adverse health effects which in extreme case results to death.

“Other items seized at the crime scene include 57 empty gallons found at the scene.

“Investigation is ongoing to arrest all those connected to the dastardly act and charged to court for possible prosecution.”